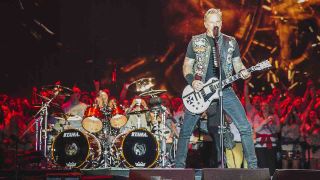 The death of Ennio Morricone at the age of 91 has robbed the music world of a giant. The Italian was one of the most important composers of the 20th Century – and also someone who has become inextricably, and unexpectedly entwined with Metallica.

In 2018, Morricone (commonly known to those around him as 'Maestro')  appeared at the O2 Arena in London. He performed his most famous works with the Czech National Symphony Orchestra to a packed venue. But one piece of music stood out: The Ecstasy Of Gold. When it was played during the main set it received a massive reaction. But when the great man reprised it for the encore, it got an even more rapturous response. People stood up and… headbanged. Why? Because the piece has long been associated with Metallica, and through this connection countless metalheads were inspired to become Morricone fans.

The Ecstasy Of Gold originally appeared as part of the masterful soundtrack for the iconic 1966 spaghetti western The Good, The Bad And The Ugly.  It was Morricone's thunderous music that helped to cement the movie as a classic. But two decades later it had taken on another, entirely unexpected life, after Metallica adopted it as the intro music for their shows. More than merely a means of welcoming the band on the stage, it has become a major part of any Metallica gig: a portent for what is to come, setting the tone and atmosphere in a way nothing else could.

James Hetfield recalled in the mid-80s just why Metallica began to use this as their intro music a few years earlier, on the Kill ’Em All tour. “Originally we had a really dreadful tape as our intro. Just the sound of a heart with the beat getting faster. Rubbish. Then our manager at the time came up with the idea of replacing it with The Ecstasy Of Gold. And from the first time we used it, something happened. It just set us up for the night, and got the fans excited.”

Other metal bands have their own iconic intros to generate anticipation. Iron Maiden have long used UFO’s Doctor Doctor, while Ozzy Osbourne and numerous others kick off their shows with Carl Orff’s dramatic Carmina Burana. But The Ecstasy Of Gold, as used by Metallica, remains the greatest intro in the history of metal.

Metallica themselves have gone through multiple changes over the years, but they have never dropped The Ecstasy Of Gold. It swells from a gentle opening to a force majeure, before easing off and then building to a tremendous climax that has everyone pumped up and chanting along.

What Morricone created was a three minute and 20 second musical blueprint for what Metallica would later become. The Ecstasy Of Gold was dramatic, impassioned and huge, using orchestration to create a dense, dark, powerful feel that would later be mirrored by the Bay Area band. Listen to prime Metallica, and you can hear his influence in their music (The band performed their own version of the song for the 2007 tribute album We All Love Ennio Morricone, but even they would admit the original is still peerless.)

It its own right The Ecstasy Of Gold is a work of genius - one that, for anyone who has seen the movie, immediately brings to life the image of Eli Wallach racing through a cemetery in search of a chest of gold. But for Metallica fans everywhere, it will forever signal the imminent arrival of one of the world’s biggest band. That's how deeply embedded it is in Metallica folklore – and beyond it, in the mythology of metal as a whole.