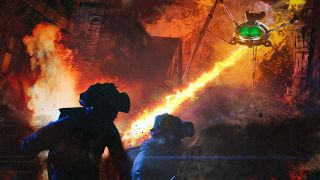 During the last two hours, we’ve felt sea spray hit the back of our neck, been poked by a tentacle and glimpsed a woman getting brutally murdered. Welcome to Jeff Wayne’s The War Of The Worlds: The Immersive Experience.

Aside from Orson Welles’ panic-inducing 1938 radio play, Jeff Wayne’s Musical Version Of The War Of The Worlds is the one of the best-known adaptations of H.G. Wells’ novel. Released in 1978, it turned his story of a Martian invasion into a prog masterpiece, with a cast of distinguished voice actors, memorable leitmotifs and distinctive alien noises. This in turned spawned a videogame and a live stage show, where you could see the story come thrashing to life.

The newest spin-off, based in central London, casts you as a citizen fleeing from the extraterrestrials. As you’d expect from an immersive experience, actors leads you from one room to another where you encounter a variety of characters and scenarios. The difference with this one? VR – a way to render those Martian fighting machines in all their towering glory.

The set-up is that Wayne’s protagonist ‘The Journalist’, George, and his wife Carrie are actors in a play that recounts the invasion, which happened several years prior. We begin in an old-timey theatre, with no clue what’s going to happen to us. Without giving away any spoilers, there’s a bit of pre-amble – and then the lights go out and that main theme hits. Instant goosebumps. And then we’re hurried wordlessly into the next mysterious room…

The experience follows the narrative of the album, with a bit of artistic licence thrown in to help it flow. We visit Horsell Common where the aliens land, George’s cottage, the great warship HMS Thunder Child on the sea and more. But despite the familiar settings, the best bit about the experience is the element of surprise.

You never know how they’re going to look, who’s going to appear and when, or what you’ll be asked to climb through, down, into or on – seriously, there’s a reason flat shoes are compulsory. The whole location is vast, windowless and partly subterranean, meaning you lose all track of real time and space – especially if you have a cocktail at the ‘Red Weed’ bar during the interval.

The actors are tirelessly enthusiastic, interacting with props and engaging you in their stories. As with most immersive experiences, it’s best when you throw embarrassment out the window and get involved, answering their questions or obeying their commands.

The VR, introduced early on, is a novel solution for showing the Martins but has its flaws. We’re strapped into a backpack that holds the computer and a headset that covers our eyes, with no instructions or visual guidelines about how to navigate the space, meaning that at one point we end up on the wrong side of a bridge. The narration during the next scene doesn’t make any sense, and we soon realise it’s taking place outside the virtual room we’re standing in – we need to step through a wall. Other members of our party experience some glitches in the graphics.

But when it works, it’s loads of fun. The Martians are gigantic, the sea is expansive, and there’s an unassailable sense of freedom that comes with being able to roam around wherever you like, not to mention the fact VR is still a novelty in itself. The technology’s used best in the final scene, where actions in the physical world have reactions in the virtual one, creating an even greater feeling of absorption and astonishment.

As for Jeff Wayne’s distinctive music, it ebbs and flows throughout, often accompanying the transition from one scene to the next. Sometimes its themes subtly throb and hum in the background, and at other times – particularly with Autumn’s Child – it takes centre stage, along with the VR. There’s never any doubt the experience is based on his musical.

Jeff Wayne’s War Of The Worlds: The Immersive Experience is like an elaborate fairground attraction that plays on a sense of Victorian sideshow wonder. It’s also like being inside a schlocky B-movie where the threat feels real, but super entertaining. What’s clear is that so much imagination and care has gone into it. The chances of anything coming from Mars, are a million to one he said… so experience this invasion while you can.

Jeff Wayne’s War Of The Worlds: The Immersive Experience is open until November 15. Tickets are on sale now.