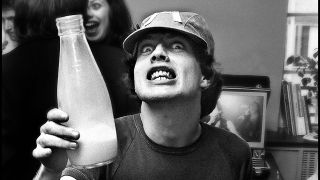 A book by Jeff Apter, AC/DC 1973-1980: The Bon Scott Years, tells the story of the band's career before Back In Black launched them into the rock'n'roll stratosphere.

The excerpt below traces the band's first few weeks in London, following their departure from Sydney Airport on April 1 1976.

"We don’t want to give the impression we’re glad to get out of Australia to try and make it elsewhere," the band's then manager Michael Browning told Rock Australia Magazine. "AC/DC are an Australian band and, as far as we can see, want to stay based here."

Today, the #1 single in the UK is Brotherhood Of Man’s Save Your Kisses For Me, closely followed by ABBA’s Fernando and Billy Ocean’s Love Really Hurts Without You. Yet just the day before, the Sex Pistols packed the Nashville Rooms in London. Somewhere around this time, frontman Johnny Rotten informs Sounds: "I hate hippies and what they stand for. I hate long hair. I hate pub bands. I want people to see us and start something, or else I’m just wasting my time." AC/DC, clearly, are entering a musical minefield.

Soon after arriving in London, Bon Scott is having a quiet drink at a pub in Finchley that he used to frequent when he was in the UK with Fraternity. Within minutes of finding his favourite barstool, Scott is hit with a beer mug. He returns to the band’s digs with a dislocated jaw and missing several teeth, swearing blind (when he can swear) that he’s been the victim of collateral damage. "It wasn’t even my fight," he insists.

The band’s coffers are lightened some $2,000 to pay for Bon’s new set of chompers. It’s hardly the best way to begin their UK assault.

Having been stuck twiddling their thumbs for several weeks in the wake of the death of Paul Kossoff and the cancelled Back Street Crawler tour, and with Scott’s new dentures now in place, the band finally make their UK debut, at a nondescript Hammersmith pub called the Red Cow, not far from their digs at 49 Inverness Terrace, Bayswater. They are booked to play two sets, for a fee of £35. A sign outside the pub reads, ‘AC/DC—from Australia!’ Ian Dury & The Blockheads played there recently; likewise pub-rockers Bees Make Honey.

Recalling the night for Classic Rock, Malcolm Dome, who was at the gig, sets the scene: "The Red Cow was an unpretentious West London boozer-cum-venue, with a reputation for supporting young bands. The action took place at the back of the pub, in a sweatbox of a room with an official capacity of 250 and toilets that were in a constant state of disarray due to a stream of people clambering in through the windows to avoid paying to get in."

On arrival at the Red Cow, the band are greeted by the sight of a near-empty room— Patti Smith is the big draw across town—and the publican’s two growling, hellhound Dobermans, who snap at them as they set up. Yet, from the opener Live Wire onward, they play as though the crowd numbers thirty thousand, not thirty. Angus even drops to the floor and performs a stellar dying-bug routine during Baby, Please Don’t Go.

During a break between sets, the few punters left in the room disappear, leaving the group wondering if they’ll be playing to themselves for the rest of the night. In fact, those who saw the first set have gone out to hit the phones and tell their friends to get down to the Red Cow—quickly. By the start of the second set, the room is bursting with bodies—among them Silver Smith, a woman with whom Bon Scott had an affair in 1971. They go home together that night.

Now, with way more onlookers sardined into the room, Angus decides to bust out all his best moves. At one stage, mid-solo, he dashes out of the door of the pub and down Hammersmith Road, a roadie close behind him, while the rest of the band play on.

When this now-legendary gig ends, AC/DC’s UK booking agent, Richard Griffiths, who runs Headline Artists, walks over to the band, shaking his head in wonder.

"That," he gasps, "was the loudest, meanest thing I’ve ever heard in my life."

Not long after, bassist Evans meets a fellow Aussie at the Red Cow.

"Did you know AC/DC play around here?" the drinker asks the bemused bassist.

"That’s quite a coincidence," Evans replies. "My name is Mark Evans, and I play bass in AC/DC."

The surrogate Evans explains that the line works a treat with the ‘chicks’.

"You just did it to the wrong guy, mate," the real Mark Evans replies.

The band travel to Edinburgh to play the Sighthill Campus, a show organised by the Napier College Student Union. Usually, the student’s union can only afford to pay bands fifteen quid, but after hearing their Australian recordings, they agree to up the fee to £50 for AC/DC. Ticket prices are duly increased, from 50p to 75p. One hundred and fifty punters catch the show.

AC/DC play a free gig at the Nashville Rooms in London, billed as an ‘Antipodean Punk Extravaganza’, pulling in around sixty fans. Three weeks earlier, the venue hosted the Sex Pistols, along with such other acts of the moment as The Stranglers and The 101ers, fronted by Joe Strummer—the very bands with whom AC/DC insist they have no connection.

A group named Captain Video open for AC/DC at the Nashville. Their manager, Bryan Taylor, is standing behind the mixing desk when Malcolm Young strikes his first power chord in anger and the band pile-drive their way into Live Wire.

"From then on," he later writes of the experience, "I was on another planet. This was raw energy: loud, proud, vibrant."

Caroline Coon reviews the Nashville Rooms show for Melody Maker. Unlike other writers of the time, she resists the inclination to slag off the Aussie rockers—she does make references to "outback rednecks" and "macho-chunder bar proppers", but insists neither tag fits AC/DC—before locating the band’s secret weapon: their schoolboy guitarist.

"In essence," she writes, "AC/DC are nothing new. The legs-astride, uncompromisingly male stance of Malcolm Young (rhythm guitar), Phillip Rudd (drums), and Mark Evans (bass), their faded denims and sweat-soaked T-shirts, are a familiar sight in the rock’n’roll arena. … What, though, makes them a band to be seen and heard, are the extraordinary, virtuoso antics of the lead guitarist, sixteen-year-old [sic] Angus Young. The rest of the band are fine foils for him as he gives a not-seen-since-Quasimodo-did-a-dive-and-RichardNeville-left-the-Old-Bailey performance of a doubled-up school kid in the throes of an ecstatic mutation with his guitar. (He wears the appropriate flannel drag and satchel)."

Four days later, the International version of High Voltage was released on Atco Records. Only Classic Rock's Geoff Barton, then writing for Sounds, gave it a good review, describing the band as, "a tonic in the midst of the all-too-serious, poker-faced groups of today. If there ever was a good time band, this is it."