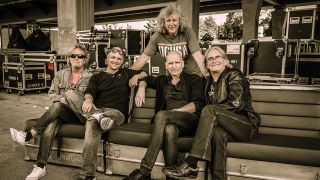 Next year marks the 40th anniversary of the Canadian band Saga. Their mix of prog, pop, pomp and AOR sold millions of records in the 80s, and they headlined Hammersmith Odeon, as well as playing two-men-and-a-dog embarrassments in the UK. As frontman Michael Sadler explains, 40 years on, there’s still plenty of life in them yet.

You left Saga for family reasons for four years, and returned in 2011. Did that allow you to take stock and perhaps bring the band a slightly refreshed vision?

I’d like to think so, because the next album we did [20⁄20] was our strongest in a while. We had reached the thirtieth anniversary, and the timing [for me to stand back] was perfect. My wife was pregnant within a month and a half and I spent four and a half years embedded in my son’s life before she told me: “It’s time to go back to work.”

You secretly attended a Saga show when your successor, Rob Moratti, was singing with them.

[Laughs] My disguise consisted of a baseball cap. And, unsurprisingly, it didn’t work too well. Hearing someone else sing my songs was the most surreal thing I’ve experienced. I ended up leaving after three or four songs.

Live In Hamburg is the eighth official live album from Saga. What does this one have that the others didn’t?

For starters, we’ve been getting better and better of late. It could be the introduction of Mike Thorne [drummer, who joined in 2012]. But we’re having a lot of fun. I wish there was a DVD to go with it, but you can hear the energy in the performance and the interaction with the audience.

Are the band working on a new studio record at the moment?

It’s pretty much essential, as next year is our fortieth anniversary.

Presumably there are big plans afoot regarding that?

My dream is a pay-per-view special on the exact date of the very first live show, June 13, which would feature everybody who’s ever played in the band, but logistically it would be very tough to organise.

Puerto Rico, where overzealous fans attempted to smash their way into a sold-out venue with sledgehammers, was briefly Saga’s biggest market, but is Germany still the band’s heartland?

Yeah. And both of those territories took off at the same time. We didn’t even know where Puerto Rico was until we went there [laughs]. The best I’ve been able to theorise is that it’s the rhythmic side of Saga that attracts both.

And why doesn’t the US quite seem to ‘get’ Saga the way other countries do?

Well, pockets of America do get us, but it’s a very big country. We’ve had a lot of problems with record companies in the past, and out of sight can sometime lead to out of mind. I’m sure some people don’t even know that Saga exists any more.

Despite consistent promises to return, the band still haven’t played the UK since a poorly attended show at London’s Garage in 2006.

Now more than ever, it really does boil down to economics, and we have yet to find that person to make it happen for us. But we’d really love to play the UK next year in our fortieth anniversary year.