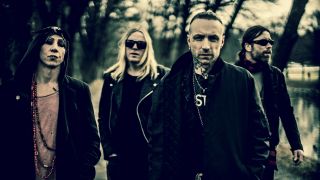 Five years ago, after touring their eponymous fifth album, Sweden’s Backyard Babies embarked upon a hiatus of unspecified duration.

As they’re about to unleash their comeback album, Four By Four, lead vocalist/guitarist Nicke Borg admits that their ‘glad to be back’ reunion was never a foregone conclusion.

So Backyard Babies are finally back?

Well yeah, for a few years even I wasn’t sure what was going to happen with the Backyard Babies, but building that mystery was almost part of the purpose of going on hiatus. We left it like that so that the fans, the media and anyone else who cared to speculate would be left wondering whether there was going to be something new. Once we decided that we should write music together again, and play live, it was actually a pretty quick process. I’d written a bunch of songs, so we started working on those in the studio, and it was like we’d played together only yesterday.

So what have you been up to since you last toured together?

Me and Dregen have both been active. Even though I said to myself and everybody else that I was going to take a step away from music when we decided to take a break in 2009, I only managed to last three months before I started working on my Homeland project. So I’ve kept pretty busy doing that. I’ve done five records all of which are quite different, leaning toward country, acoustic, folk, and I had a good deal of success with that, and I’ve written a lot of songs for other artists, working in music 24⁄7. Of course, Dregen recorded his solo album and worked with Michael Monroe, but Peder and Johan had been absent from the scene altogether. Peder hadn’t played the drums for five years.

Five years is a long time to have been away.

I can’t believe it’s been five years, it doesn’t feel like it. Right now, we’ve just finished with the album, the new single is out, and from what we’ve heard back, both the people who liked our early stuff and those that liked the later stuff are teamed up behind the new material. They all seem to like what they hear of the new material. Which is great, because there’s always a chance that people will be disappointed when you’ve been away for a while because there’s the danger people will build up their expectations and then simply not get the new stuff, but that seems to be the opposite of what’s happened and we’re really happy with how people have reacted to Four By Four so far.

How was working in the studio together after such a prolonged break?

So, we were thinking about going away to record, but due to family commitments we decided to stay in Stockholm. We had some great songs written, but didn’t want to risk over-doing them so we decided to work with someone we knew, who would take great care in the studio and make us perform better. So we got (Rammstein producer) Jacob Hellner, who we used last time, but in the end we brought the best performances out in ourselves. It may sound funny, but I think we’ve become better players from being away from each other. I dunno, maybe it’s just the hunger of playing together again coming out in us.

Have you changed since we last saw and heard you?

In a lot of ways we’re still the same, but we’ve also have, developed into – and this might sound really, really boring – but we’ve grown up, in a positive way. We’re able to look at things from a more reasonable point of view. Which is a must if we want to survive as a band. This time I’m expecting us to go on for a very long time.

It was important for us to take a break, to look at it from the outside and try to analyse what we’re doing right and what we’re doing wrong. If you just walk the same road you get tired of it and split up, and that’s why we took a break. It’s cool to be back, there’s a lot of interest in the band and the audience only seems to have grown since we took the break. Looking back, we should maybe have taken more breaks.

And what about the Backyard Babies lifestyle? Have you still got the stomach for those all-night Kalimotxo sessions at the 8-Ball Club?

(Laughter) I don’t know what you mean? No, for myself, I’ve been sober for seven years, man. I’m celebrating my seventh drug-free year in August, so I’m a happy camper. That said, everybody’s enjoying life on different level, with their kids and families around. We try to focus more on what we’re doing on stage and what we are performing in the studio now, to enjoy the work itself. There’s a lot of positive stuff to focus on these days, and I think we all got our fair share of Kalimotxos a few years back.

We had some sessions I’ll never forget… Or, more accurately, never remember…

Yeah, I mean, it’s good to be able to look back at those days with a romantic, little smile. We had some really good times, but it would be really embarrassing to be crawling in the sewer today being fucking totally strung out. It’s a little bit pathetic really, so I’m happy I made the choice to quit.

Will you be touring the UK soon?

Yes, we will. We’re going to release the tour dates, which will be in November, soon. There’ll definitely be a few shows in the UK because the UK’s always been very important to us. Ever since we first set foot on your island it’s been great. The fans there really care about their music and have always treated us well, so I’m looking forward to it.