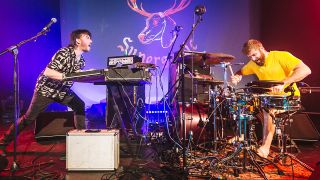 Originally starting out life as a one-day festival in Birmingham in 2003, Supersonic Festival has grown into one of the world's most important events for new music. Cherry-picking the finest experimental music from all over the globe, its line-up grows increasingly diverse with each passing year. Now in its 15th year, Supersonic has become known as an event that consistently represents some of the globe's best and most innovative music.

While diverse, its line-up focuses on the heavier side of experimental music – it takes place in Birmingham, home of metal, after all – and this year housed everyone from transcendental riffers Neurosis to outsider rap musician Moor Mother, and featured artists from the worlds of industrial, doom, among others.

We headed along to Supersonic Festival to see what we could see, and these are the things we learned.

Heavy music comes in many shapes and sizes

With heavy music, there really is no rulebook for doing it right. From the reality-bending riffs of Neurosis, to the pummelling black metal from Savage Realm, to Big Joanie’s stirring crowd addresses about the importance of community, to Big Lad’s frenetic synth-drums explosions (can we take a moment to congratulate the woman in the summer dress kicking the shit out of all the men in the Big Lad pit? We salute you), to our warped ramble through Daniel Higgs’ mind, Supersonic gives a stage to heavy music’s most intriguing acts. They’re all different, they all explore what it means to be “heavy” in individual ways, and they’re all resolutely themselves.

Take a chance on something new

Like many underground festivals, some of your best Supersonic moments are likely to be spent with an artist you know little about but decide to check out on a whim. Multiple people told us over the weekend that their highlight was Apostille – imagine if Lewis Capaldi’s disturbed older brother had been making music that could’ve appeared on a Mute Records sampler in 1981 and you’re sort of, almost there – who won over a curious crowd at the Hellmouth. Checking out something you've never heard before but can't help be curious about generally pays dividends.

From the weekend’s double-whammy opener, which comes in the form of two of underground metal’s most cherished acts – namely hometown industrialists Godflesh and US doom godfathers Neurosis – to the Home of Metal celebrations currently taking place across the city, it’s clear that Birmingham’s music culture still holds heavy music at its heart. At few other festivals is the cultural heritage of their host city celebrated so successfully. It makes the weekend feel intimate, local and multi-dimensionally global all at once.

One of the weekend’s stages, dubbed The Hellmouth, is actually a stage sitting within the gaping jaws of a huge monster which, admittedly, bears more than a passing resemblance to Shrek. Designed by Turner Prize nominee Monster Chetwynd, who spends the weekend there dressed as a giant whoopee cushion, the stage plays host to some of the festival’s less accessible acts. But, the atmosphere barely drops all weekend, proving that if you give yourself over to the weekend’s weirder shit and go with it, you might just enjoy it.

How do you follow a headliner like Neurosis? You get an entire festival's worth of people to stomp across Birmingham to an afterparty that involves grown men thrashing it out over a synth and drum kit (Big Lad), a whole lot of crushing doom (Yob) and a party that only stops when you want it to. Or when you get kicked out of the nearest 24 hour bar – whichever happens first.

Supersonic Festival is held annually each July – check out their official website for more information.