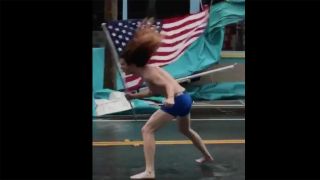 Using the power of Slayer's Raining Blood and some super-tight blue underwear, Lane stands proud with the American flag in the middle of a street in what we assume is North Carolina.

Referring to himself as Florida Man, Lane tweeted "YOU ARE WEAK AND SMALL FLORENCE!!!!! FLORIDA MAN IS HERE!!!!!" with a video that has been viewed over 1million times.

Storm Florence made landfall at the end of last week and has since weakened into a tropical depression, according to the National Hurricane Centre.