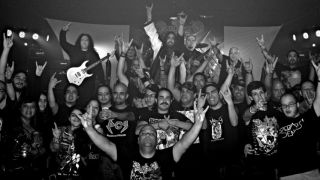 Made by Dr. Nelson Varas-Díaz, professor at Florida International University, the movie explores the differences and similarities between the metal scenes of Cuba, Dominican Republic and Puerto Rico, and how each metal community has been influenced by history, culture and politics.

Metal Islands tells the story of how metal reached this part of the world. As with comparable scenes in Asia, the story of metal’s triumph in Nelson’s neck of the woods runs in parallel with changes and conflicts in the development of Caribbean society: heavy music, born through struggle but imbued with a strong sense of community and self-belief.

“In terms of the Caribbean itself, a lot of these bands and musicians feel isolated in their own communities,” Nelson previously told Metal Hammer. “If you’re a young man and you have a limited amount of concerts to attend, you grow up thinking that these small homegrown scenes are too small and bad, but if you look from an international perspective, you can see that those scenes are very important and really, really active. So we wanted to have people from the three different islands understand where they each came from, but also what they all have in common, so it will continue to foster and develop a story that brings them all together. If we can do research and bring people together, I don’t think you can ask anything more.”

The Metal Islands has so far won eight laurels from film festivals around the world, and the team are already working on a follow-up which investigates metal in Latin America.

Is the Caribbean the new global hotspot for metal?