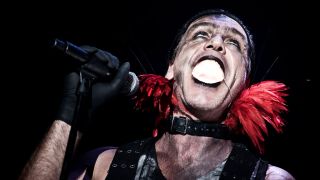 Rammstein blazed their way fourth from the industrial metal scene of the '90s with their unique blend of grooves, metal and electro-industrial tropes, thrown into a fiery pit full of controversy. Dubbed Neue Deutsche Härte (or New German Hardness) this concoction set the heart, souls and pants of the metal community on fire and they have continued to captivate fans for two and a half decades.

They've churned out industrial anthems, produced some of the most controversial videos in metal (which is quite a feat for a genre that's made its name on devil worship and scaring your nanna), wowed us with their spectacular live shows and even made it to the movies... But their enduring appeal is undoubtably not just down to the sex, violence and flames but their ability to consistently produce catchy yet heavy tuneage.

As we eagerly await their brand new album, which at the time of writing this, still remains unnamed (another thing they are famous for: mystery), we thought we'd ask your help in compiling our very own list of the German industrial heavyweights' greatest tracks ever.

So, read through our comprehensive list of Rammstein's tracks and get voting! Think we've missed one? Don't worry, there's an option for your to add all those obscure b-sides we might have left out, and you can choose up to five songs in total.