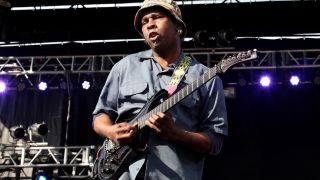 “I’ve owned Loveless in at least three different incarnations. I’ve had it as a CD, I’ve had it as an electronic download, but the very first time I got it was in the form of a cassette. I totally remember the circumstances of picking it up. My friend had been raving about My Bloody Valentine. He told me I had to run out and get this album.

“The first song I heard was Only Shallow. I’d say it’s still my favourite. That opening snare drum figure – it’s so anthemic. All the elements that make this record great are right there. The other track I love is I Only Said. But I usually listen from beginning to end, and just let it all wash over me. I dig the whole thing. It has a seamlessness.

“Loveless defies all kinds of stylistic boundaries. For instance, most of the lyrics are scarcely intelligible. I’m the kind of person who likes hearing lyrics. I like to know what a song’s about. I couldn’t tell you what Loveless is about, but it has enough emotional weight that I can get by without understanding it. It’s lyrical, but you can’t understand what the lyrics are.

“Kevin Shields is one of my favourite guitarists. It surprises me that people think if you’re into one thing you can’t appreciate anything else. There are many guitarists who aren’t ‘technical’ that I appreciate. Kevin Shields achieved something on Loveless that only the great guitarists achieve: he achieved a wholeness and a unity. He created his own sound.

“It’s always funny to try and explain something that you love. It’s like [expressionist painter] Jackson Pollock. For some people, Jackson Pollock is just some paint being thrown around. And on a certain level, that is all it is. Part of me agrees. But it’s much more than that too. The first time I saw a Jackson Pollock, it was the first painting that physically assaulted me. I felt the air sucked out of my chest. I felt emotions from a painting that I’d never felt. I’d say the same thing happened when I first heard Loveless. If somebody hears it and says it’s just noise, then I dare say there are a lot of other records with heavy guitar on that they’d say is just noise too.

“Defending it or convincing someone of it – I wouldn’t waste my time doing that. I got it immediately. I fell in love with it immediately. It’s hard to put into words what’s so good about this album, and that’s what I love about it. When somebody asks you: ‘Why do you love me?’, if you can give reasons why you love them, then maybe you don’t love them as much as you think you do.

“One of the diseases that we have now – and what has turned music into such a disposable commodity – is that we have to give reasons why we like this or that. I think that’s deeply shallow.“

This was published in Classic Rock issue 94

How do Living Colour plan to celebrate their 30th anniversary? Read it all here