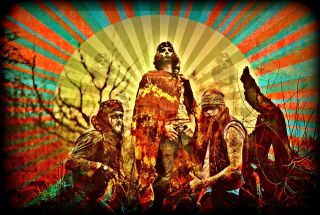 As Donald Trump skids into Britain along a shit-stain of ignorance, ill will, racism oozing like pus seeping proudly from a sore, helium-brained self-regard and the kind of planet-wrecking policies that confirms he watches James Bond movies and roots for the villain, it’s clear that we have two native qualities with which to offer resistance: absurdism and kebabs.

Leaping into the fray are Chubby Thunderous Bad Kush Masters. Armed with surrealist wit, a moniker that reads like a martial arts movie title from a planet whose atmosphere is made of weed fumes and an arsenal of greasy meat products of dubious origin, they’re heralding the release of their debut album, Come & Chutney, with a video throwing everything including the chicken bucket at the preposterous orange shitgibbon himself.

Taken from the Come & Chutney album - released today via Riff Rock Records - Döner Trump is a call for “Resistance against pricks” summoned via irrepressible stoner/sludge riffs and a video that weighs as hard on your conscience as it does on your stomach. Starting off like a pirate broadcast scene from Mr Robot if it was directed by Chris Morris, it lurches into a montage of Trump inanities, the three-piece in various guises calling for peace, understanding and stomach cramps as they unite around what really matters and ask for extra chilli sauce on top.

If you’re already drooling at the prospect, we’re going to leap straight into the video below, but scroll further down for the band’s straight-from-the-cholesterol-clogged-heart explanation!

Read the band's statement on the video for Döner Trump here!

"A lot of horrible shit goes on in the world all the time. People don’t have access to basic amenities, families are torn apart, women are treated as less than human, cultures oppress one another because they look or act differently, amongst all the other ridiculous and hateful wastes of energy that individuals and societies have to endure. The solutions seem simple, right? Don’t be a cunt to other people. Look after those in need. Embrace the diversity of humanity. How can a living, sentient human not feel that way?

"IT WON’T FUCKING HURT YOU TO NOT BE A DICK TO OTHER PEOPLE YOU TOSSBAG. WOULD YOU BE HAPPY PADDLING ACROSS A SHITTING MASSIVE OCEAN TO GET AWAY FROM FUCKING BOMBS AND DEATH, ONLY TO BE LEFT FOR DEAD BECAUSE THE COMFORTABLE, FAT TURDS NEARBY THINK YOU MIGHT LACK COMPASSION OR WANT TO MILITARISE THEIR YOUTH? OH YEAH, SEEMS LEGIT TO STYMIE THE GROWTH OF NON-WHITE, NON-MALES, THEY MIGHT END UP DOING WELL AND…. AND THEN???!! WHAT THE FUCK ARE PEOPLE GOING TO DO IF YOU’RE NICE TO THEM AND LET THEM CONTRIBUTE TO SOCIETY? PERHAPS THEY’LL BE FUCKING NICE BACK TO YOU AND MAKE SOME SWEET LAWS WHERE WE ALL GET AN EXTRA DAY OFF AT THE WEEKEND AND THERE’S LESS POLLUTION AND MORE LAUGHTER. WE’RE ALL IN THIS SHITSHOW OF A WORLD TOGETHER, FUCKING MAKE IT WORK, YEAH? IT’S NOT FUCKING HARD.

"How can someone be so devoid of empathy that they aren’t moved by such disgusting inequalities? Enter that orange blimp cunt. Trump doesn’t deserve the fucking air he putrefies with his breathing, or the attention we lavish on him for being the puffed-up, slime-fingered turd racket that he is. He doesn’t give a shit about anyone or any country, he’s a fucking terrorist, instilling fear in his own subjects so they’ll keep feeding his wallet and his gut, hating whoever and whatever he claims threatens them. Should he be allowed to visit the UK? Does it really matter? Perhaps it says more about those that would invite him than it does about him; he’s not the only fucking awful piece of work out there actively seeking to make your life and the lives of those around you shittier so they can keep on with their insular beliefs and lies. They’re all over the place and will continue to be, because some people are hateful cunts. Sometimes that’s their own fault, but sometimes they’ve just taken so much hate that they exude it back out into the world. And we might sometimes feel sorry for them. Because humans don’t intrinsically hate. We’re social things and we’re all different and we’re all weird. We can all get on with one another, despite what hate is preached to us and whatever fears used to hook us in to some bogus agenda. We’re not a political band but that’s why we wrote this song and made this video; there’s a lot of shit cunts around but we’re in this together and can all get kebabs later."