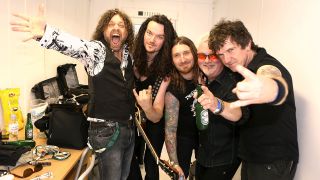 Taking their name from a series of books by writer Michael Moorcock, the Tygers Of Pan Tang formed in Whitley Bay in 1978. They released their first single, Don’t Touch Me There, via local independent label Neat Records before being picked up by MCA as part of the New Wave Of British Heavy Metal. Afterwards their style became more melodic. The band split up in 1987, before reuniting in 2000, galvanised by the sole remaining original member, guitarist Robb Weir. Their self-titled new album is out now.

In eighteen whirlwind months, The Tygers rose from the working men’s clubs of the north-east to headlining at Hammersmith Odeon. How do you look back on those NWOBHM days?

We started out playing anywhere that would have us. The working men’s clubs would take a hard rock band so long as you played a few covers too, and we did All Right Now by Free, Whole Lotta Rosie, Bastille Day by Rush and Ted Nugent’s Cat Scratch Fever, among others.

Why did the wheels come flying off?

Our debut album Wild Cat [1980] had reached number eighteen in the chart, followed by Spellbound [’81] at thirty-three. Crazy Nights [also ’81] stalled outside the top fifty, but The Cage [’82] did the best of them all, though by that point MCA had started to bring in outside writers. At a meeting, they demanded more of the same with the fifth album, so I left the room.

Whether due to bravery or stupidity, the rest of the boys followed me because we had an album of self-written songs. We thought we’d just walk into another deal, but of course we didn’t.

The music had progressed from balls‑out metal to something far more tuneful. Did that play its part?

Possibly so. But although our style was still evolving, we felt we had a Tygers sound, and the fact that the albums we wrote had charted confirmed that we could do it ourselves.

[Laughs] I gave him some stick for that. But Jon has carved a very good thespian career – he’s done TV, ads, short films and worked in the West End.

Michael is our John Sykes-plus. Not only can he play everything that John [later of Thin Lizzy, Whitesnake and Blue Murder] could, but he also has an honours degree in music. You should hear him play Hellbound in a country and western style.

Who are the ladies in the video for current single Glad Rags, morphing into the group and guzzling down Tyger Blood, the band’s official beer?

The girl that played the drummer is the partner of Craig [Ellis, drums], who runs a dance troupe, and the girls are from there.

Next year marks the Tygers’ fortieth anniversary. What motivates you to keep on doing this?

Rock’n’roll is the nicest disease you can catch, providing endless pleasure, but it’s also the deadliest – there’s no cure.

Tygers Of Pan Tang is available now via Target Records.