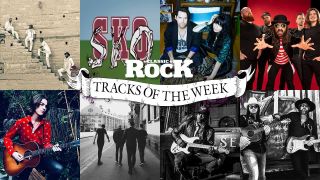 We were inundated with contenders for this week's new music round-up. Choosing our top eight was no picnic. Still, after much debate and hair-pulling, we've done it and we reckon it's a pretty sweet list. But which track deserves to be crowned the winner? Only you can decide.

In last week’s poll Mercutio rocketed to first place with Slap Bang, followed by Vega in second place and Austin Gold in third. Check out our winners’ single below, then dive into this week’s selection and vote for your favourite at the foot of the page.

Intentionally released now, as a jet of positivity in tumultuous times, the Mali foursome’s new single (and their first sung entirely in English) is a life-affirming, hypnotic mix of rocky blues and Malian rhythms. “Worry is a positive energy that Songhoy Blues want(s) to be a ray of hope for humanity,” the band say. “Worry is about not stopping fighting because at the very end you will find the light.”

Check out updates, music and merchandise.

Want to shut yourself away from the 21st century for three and a half minutes? Do it with this cosy yet sparky dose of 70s-tastic rock’n’roll. The Norwegian rockers’ new single nods to both sides of the Atlantic (think Faces, Rolling Stones, early Steely Dan) and comes with a classy sprinkling of soul in the chorus harmonies. As satisfying and comfortable as slipping into your favourite pair of... well, slippers.

If Joan Jett had a three-way with Nine Inch Nails and Rammstein, this could have been the result. Parasite is an angular, irresistible fusion of industrial atmosphere, dashes of electronica and wickedly sleazy blues-based grooves, propelled by the Jett-come-Marilyn Manson vocals of Danyell Souza. Like what you hear? Check out this and more on their new EP, which is out now.

The title track from Wagons’ forthcoming album is another righteous, hooky headbanger, all full-beam tuneage and Duracell bunny levels of guitar-chugging energy. Lines like ‘killing some time until I go deaf in my house of noise’ were written pre-Covid19 but inevitably feel very relevant in the current climate. A ‘fluke’ then, in that regard, but a darn good one.

Pre-order House Of Noise and check out updates.

If anyone’s going to write a song called The Kids it seems right that it should be...y'know, one of the actual kids. Hotly tipped rising guitar star Thornton has honed his songwriting chops since he first cropped up on our radar, peaking with this new single – which makes us think of what Oasis might have sounded like in the 70s, without feeling generic or tired. He’s 17 now. Think of what he might still have up his sleeve...

Check out updates, music and more.

Bruce Soord and co are back with a lusciously moody first taste of their new album. TPT fans will recognise the textured colour palette (the sort that played a key part in shaping the precedent of 'nu prog' label KScope) only here it's amplified up a gear; making an enveloping framework for Soord's deeply personal lyrics. Orchestral flourishes create warmth and scale, while eastern, Zeppelin-y guitar licks add intrigue to the chorus and climax.

Ayron Jones - Take Me Away

Seattle singer/guitarist Ayron has opened for BB King and Guns N’ Roses, and played alongside Run DMC, Public Enemy, Jeff Beck and many more. This all suggests he’s getting something right, but Take Me Away confirms that he’s got the goods to back up the A-list endorsement. Described as "an anthem of perseverance and a voice for all of those who have ever felt broken down, disparaged and forgotten," it plays like an urgent, gritty marriage of grunge and Jimi Hendrix blues.

Check out updates, music and merchandise.

To finish let's welcome the incoming heatwave with this sweet, sun-kissed new one from Allman Brothers offspring Devon Allman and Duane Betts (and pals). Allmans fans will coo adoringly at the familiar tone and style of the guitar solos, and anyone missing Ramblin' Man Fair – or any summer rock festival that sells those flowery headbands – will get a kick out of the highly singable chorus.