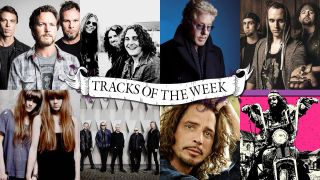 We love checking out new music here, from old and new acts alike, so it’s always really interesting to see what you all rate the highest – out of the selections we pull together. Last week you voted these guys into the top three:

Now let’s see who makes the cut this week. Only you can decide, so have a listen to this lot then vote for your favourite at the foot of this page. But first, let’s have another spin of last week’s first prize winners The Rocket Dolls:

The first new single from Vedder and co in five years hath landed! And it’s a politically charged cocktail of easy-on-the-ear riffage and grungy undertones. Taken from their upcoming new album, co-produced by the band and Brendan O’Brien, it’s split opinion on The Internet; what do YOU think?

Welsh hard rockers Florence Black don’t so much cover this Budgie track as shove several thousand volts through it (and introduce it to the likes of Monster Magnet and Motorhead), but it works really well. It’s considerably chunkier and lairier than the ‘73 original, without sacrificing the slowed, spacier middle section. We like.

Roger Daltrey – As Long As I Have You

The first couple of chords suggest The Who’s Join Together, but actually this first taste of The Who singer’s new album harks further back – to a time when they were “a teenage band playing soul music to small crowds in church halls”. Accordingly we get loose piano-powered rhythm, soul-blues passion and Daltrey on top form.

The beloved Soundgarden tune is given hearty but slick treatment by this lot from Pennsylvania. Singer Phil Freeman is the star of the show, hitting gloriously huge notes without a hint of struggle – eyes popping further out of his sockets as the song progresses. If Soundgarden had ever needed someone to stand in for Cornell, he could’ve filled in. No question.

The Pearl Harts – The Rush

The British duo mix garagey punk-tinged grit with a blues-based hook on this jab n’ swagger cut from debut album Glitter And Spit. Laden with attitude of the best kind, it shows that sometimes you really do only need two people to make a quality racket. Catch ‘em in action on tour all round the country through March and April.

Thunder do their thang (their jubilant hard rock’n’roll thang) in front of a blinkin’ massive crowd in Cardiff, in this upbeat slice from new live album Stage – on sale March 23rd. Good mood food to send you off into the weekend.

The late Soundgarden/Audioslave man sounds sublime on this Johnny Cash cover, taken from upcoming record Johnny Cash: Forever Words – in which hitherto unheard poetry, lyrics, and letters of his are set to music by an all-star cast (including, besides Cornell, John Mellencamp and Elvis Costello among others). Dark and melancholy but rousing with it.

We’re rounding things up this week with an instrumental dose of ‘bikesploitation.’ ‘WTAF is bikesploitation??’ we hear you ask. It’s the dirty, stoney kinda sleazy subgenre adopted by this crew from Canada, or ‘the depths of hell’ as their Bandcamp page implies (the band name is taken from a ‘70s biker club). If Davie Allan & The Arrows partied with Orange Goblin, they might have come up with this.