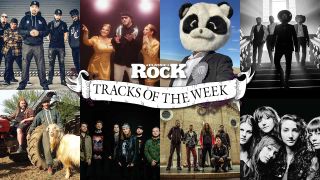 Kickstart 2020 with eight of the best new rock tracks out there right now. But which one is the best? You decide – vote for your favourite using our handy easy-to-use poll at the foot of this page.

Before Christmas these guys were voted into the top three, in reverse order:

Congratulations to our victor Ashley McBryde! And well-played to Broken Witt Rebels and Larkin Poe on quality second and third place tunes. Check out this week's selection, ingest and vote; right after you've warmed up with a spin of our latest champion...

Stick two fingers up to veganism, and anything else that’s pissing you off right now, with the title track from Ice T and co’s upcoming album (due in March). A veritable punch in the stomach of beefcake metal, hardcore and rap – with thickly laid on guitars heavy enough to beat off an army of dinosaurs – it reflects the heavier vibe anticipated from the rest of the record.

If you thought these Swedish classic rockers were all about good-time disco-friendly AOR, you were WRONG! Or so the band have said in light of this heartfelt, synth-pummelling new single. “The one thing that has kept those aging Swedish hearts beating for so long is DRAMA!” they say. “Internal conflicts, external conflicts, rumours and exaggerations.” Find this and more intergalactic emotion on their new album Aeromantic, out in February.

Formed in the late 90s before disbanding a couple of years and demos later, British rockers Mansion Harlots reformed in 2017 after an interim spent in different groups. With all that in mind their debut LP (All Around A Fairground) might feel somewhat long in the making, but it all works out happily in this sun-drenched slice of sweet, pensive pop rock. One of those instantly likeable tunes that seems to appear out of nowhere, but also feels rather timeless.

Me And That Man (feat. Mat McNerney) - Burning Churches

Behemoth man Nergal returns to his rootsy project to burn some churches… or at least to sing about them, in this steely-gazed cocktail of outlaw country, blues and dark subject matter. Grave Pleasures’ Mat McNerney does a tidy job on lead vocals, sounding deliciously romantic yet unhinged on such lyrical pearls as: ‘I’ll take up my seat next to Anton La Vey/With a Molotov cocktail and a can of gasoline’

If you’re thinking the Norwegians’ new track sounds rather Mastodon-esque, there’s a reason for that - i.e. singer/bassist Troy Saunders guesting on vocals. Sung (unusually for Kvelertak) in English, it’s an energised, melodic affair that’ll likely feel a little soft for anyone expecting their trademark brutality. Still rages like a beast though.

The Inspector Cluzo - A Man Outstanding In His Field

You might have caught this noisy bluesy rock duo on tour with Clutch a year or two ago, when they made at least as much noise as their headliners with half the manpower. Hailing from Gascon in France, where they run a farm (like, an actual proper farm; that tractor in their press shots isn’t just for show y’know...), Inspector Cluzo also do a brilliant stripped back set, as shown on this lush, gently haunting cut from acoustic album Brothers In Ideals.

Heavy, punchy psych-boogie from Greece now, where distortion reigns supreme and Uncle Acid And The Deadbeats (and their kind) are on heavy rotation every day – or so we imagine, based on this lil’ number. Struggling to be a ‘grown-up’ again, after the Christmas hibernation period? Wishing you could retreat to some kind of cheerfully stoned teenage bedroom setting, just for two minutes and fifty seconds? This is what you need.

Dark, sensual doom from Oregon now, with sporting helpings of artistically executed kink (on the video side). Slightly suspicious of the title? You really needn't be – this lot are all about the otherworldly come-hither vibes and intelligent stoner-isms. A commanding proposition with an eye for risqué visuals delivered with class.