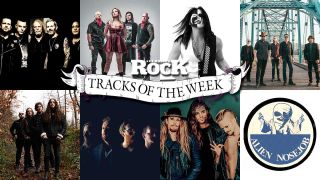 Old bands, new bands, familiar-sounding tunes, weird tunes... if it rocks, and it's good enough, it'll go in Classic Rock's Tracks Of The Week. After which it's over to you to choose the winner. Last week the two highest-placed drew an especially enormous portion of the vote, leaving the top three as follows:

2. The Darkness - In Another Life

Congratulations to Gorilla Riot, who secured the top position with Black Heart Woman. Very well-played to The Darkness as well on a hard-fought second place, and to A Thousand Horses in third. Who'll triumph this week? We have no idea, but you can help decide the outcome by voting for your favourite at the foot of this page. But before that, let's have a spin of last week's winners.

Black Star Riders - In The Shadow Of A War Machine

One of the heavier cuts from BSR’s latest, Another State Of Grace, our first track this week comes with a beefy bruiser refrain, strapping vocals and boxer-jabbing guitars that practically dare you to mess with them. Angry, politically engaged and catchy as all hell? Yes please.

Another beefcake with which to hulk up your Monday protein intake, but with more metallic menace and the sort of chorus that Evanescence and Vicious-era Halestorm might have written together. Indeed, the Kiwi quartet have already toured with Halestorm – as well as Slash, Motley Crue and Disturbed – so they’re preaching to a receptive choir...

Shades Of Gray - I Get Up

The sunshiny, gloriously cheesy new brainchild of Myke Gray – also of Skin, Jagged Edge and UFO – this is a highly danceable shaken-up soda can of glam rock boogie that doesn't take itself too seriously, and sounds all the better for it. Think Status Quo playing Download, in KISS make-up. And yes it’s as fun as it sounds.

The Georgia-based quintet have never sat on the safe, predictable side of southern rock, and they’re not about to change that. This new one is a mellow but searing, acoustically driven beauty – with nods to Neil Young, blue-collar protest-folk and sweet-as-pie West Coast rock.

Empyre continue to defy labels but sound damn good doing it. If we were to compare it to anything we'd venture that My Bad sounds a bit like Alter Bridge at their most gnarly and alternative, with a few prog metal twists in the background. According to frontman Henrik: “My Bad predicts the almost inevitable collapse of a relationship, but is an appeal to salvage it.” Heavy stuff, confidently pulled off.

One for the AOR fans now (or just anyone who likes really big, soaring tunes that shine so brightly you can see you face in them) hot off the upcoming new album from Swedish kingpins H.e.a.t. Check out this and much more on H.E.A.T II, which is out next month.

Buffalo Summer - Everybody's Out For Number 1

Sounding way grungier and nastier than their southern-rockier-than-thou band name might suggest, Welshies Buffalo Summer are opening the case for their upcoming album Desolation Blue like a bunch of hairy renegades from Nirvana-era Seattle, with their own strutting pace and snarling character. Noice.

Best band name ever? To be fair it’s more memorable than Jake Robertson (the name of the Aussie dude behind all this). The story goes that Robertson gave up “waiting on others to rock up to practice, write their parts, tune their instruments, yada yada” and decided to go it alone. Part lo-fi indie rock, part Ramones-y punk’n’roll, Television Sets suggests he’ll do just fine.