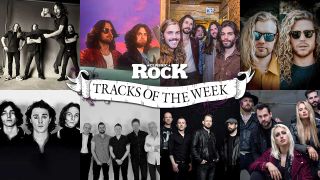 Good day to you, fellow rock lovers, riff lords and others, and welcome to Classic Rock's Tracks Of The Week, where the winner is decided by YOU. Last week you voted these dudes into the top three, in reverse order:

1. The Cadillac Three - Back Home

Congratulations to The Cadillac Three, who won your hearts in southern-fried style with the lovely Back Home! And bravo Badflower and Tygers Of Pan Tang on well-earned second and third places. Now let's see what you make of this week's A-grade selection, right after a spin of last week's winners...

Kick your week into gear with this more-ish earful of full-tilt Airbourne boogie. Accompanied by a hair-shaking, fist-pumping onstage video (featuring an incredibly rare sighting of singer Joel O’Keeffe wearing a shirt), Backseat Boogie is a rollicking grenade blast of a tune, and a life-affirming ‘fuck you’ to winter chills, Monday blues or whatever woes you may be experiencing.

We can’t remember exactly how we first stumbled upon this Brooklyn band of brothers, but when they put out feel-good, West Coast-y little beauties like this we’re bloody glad we did. At the time of us publishing this its views hadn’t even hit triple figures – that deserves to change, so get listening...

Status Quo - Running Out Of Time

Earlier this year Rossi and chums defied the odds of a Parfitt-less line-up to release the really-rather-good Backbone. Plenty said it couldn’t be done, but it was. This new single is one of our favourite tracks on it: a sweet, surprisingly stirring slice of classic Quo.

We’re very much enjoying this nugget of classic rock’n’roll from these Spaniards. If you enjoy the sound of lovingly, freshly executed nostalgia – with a tasty sprinkle of je ne sais quoi – we reckon you will too. Check more on their album, On The Rise.

Clutch main man Neil Fallon joins Michael Poulsen on vocal duties with this breakneck, caffeine-pumping-through-its-veins – one of the most danceable tunes on the Danish metallers new album Rewind, Replay, Rebound. Expect pounding keys, tooting sax, face-melting solos… Just try to not tap your toes along to it (you will fail).

These Cambridge rockers might be way too young to have seen the Kossoffs and Hendrixes of this world first-hand, but that shit’s still in their DNA – as this laid-back slab of swagger, psychedelic flavours and classic blues rock affirms. “And there in the background Don Airey (Deep Purple) sprinkles some amazing Hammond Keys,” guitarist Piers adds. Well, there you go...

Biff Byford’s son Seb has followed a different musical path, though we imagine his dad’s still dead proud based on this. Not so much NWOBHM, though fans of Blinders, the Virginmarys and Tax The Heat will love this cool, punchy fistful of grunge, punk and fresh yet gnarly rock’n’roll. Keep an eye out for their debut album Lost Art Of Conversation is out in 2020.

Marisa And The Moths - Needy