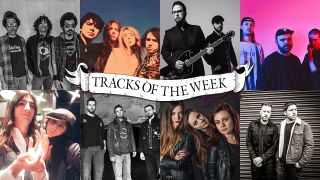 Wondering where to find new music, that you - dear rock fan - will really like? Our weekly round-up of the best new tracks rock has to offer is for you. Last week you voted these guys into your top three, in reverse order:

1. The Virginmarys - Look Out For My Brother

Congratulations to the Virginmarys, who soared to victory with this cut from new album Northern Sun Sessions! And bravo also to second and third prize winners Skinny Lister and Handsome Jack. This week we've got lots more good stuff, from some of the hottest new faces in our world, so plug in and soak it all up – before voting, as ever, for your favourite at the foot of this page.

But first, a lil' spin of last week's champions The Virginmarys with Look Out For My Brother...

We liked this sibling punk-rock trio from St Joseph, Missouri, when we came across them a couple of years ago. Now, having finished supporting The Damned on their US tour, they’re back with new musics. With a touch of Nirvana and some nicely Chilis-esque guitar in the mix, Junes is a promising suggestion of a mature next step forward to come. Plus any rock song that includes the lyric “marry an android and be amazing” merits further investigation, in our book.

The LA new rock flavour of 2018, Starcrawler made their debut album with Ryan Adams on production duties. Based on this new track, it sounds as though he’s rubbed off on them; in a good way. Somewhat warmer and sunnier than their previous tunes (which tended to err on the commandingly spiky side), Hollywood Ending is a layered, surfy addition to their existing cannon of Ozzy-esque theatrics and fake blood.

The Cold Stares - The Great Unknown

This is TOTW’s first taste of blues rock duo The Cold Stares (they’ve been going about ten years though), and we’re hooked. Originally from Indiana but now based in Nashville, they make the kind of smooth yet chunky sound that’s clearly been informed by time spent listening to early blues records, as well as more muscular rock and rootsy fodder. If Clutch wore suits and hung out with Tax The Heat or QOTSA, they'd sound like this.

The Lemon Twigs - Never In My Arms, Always In My Heart

They’re barely old enough to legally drink, but this brother duo’s brand of pop rock is startlingly mature. The accompanying video here is a compelling mini-movie in itself, portraying one story of very human pain, all the more resonant for its everydayness.

"Brian and I played in a lot of Long Island bars growing up, and man, we met a lot of people like this,” singer Michael D'Addario says. “Sometimes the Long Island mothers would gossip and you'd hear a sad story like this one and somebody would end up with a tattoo that said 'Never In My Arms, Always In My Heart'.”

This lot from Osterhofen in Bavaria, Germany, are making us think of a beerier, bluesier Motörhead – complete with a pleasingly mad-sounding hint of countrified rock’n’roll swing in the rhythm. The kind of band we imagine stumbling upon at a sweaty bar gig that looks like it might escalate into a massive brawl, but actually turns out to be rather brilliant.

The Amorettes – Born To Break

From the opening drum-pummelling through NWOBHM-meets-classic hard rock riffs and a chorus refrain that’ll stay in your head for days, it’s party time ALL the time with this new single from Scotland’s Amorettes. Stuck in a funk, and need a robust but good-natured kick up the arse? This is what you need.

We’ll leave you with a sharp shot-in-the-arm of modern blues rock and Rn’B (informed by classic influences) from Leeds rockers No Fit State. Lyrically there’s an element of personal experience in there, as singer/guitarist Danny Yates says: “Trouble Always Finds Me is about someone who has nothing but bad luck, where trouble always finds them! Part of them wants to change but part of them thrives and buzzes about the dangers that particular lifestyle brings. It’s about someone from the darker side of life who is no longer with us, they longed to be clean but felt chained to that way of life.”