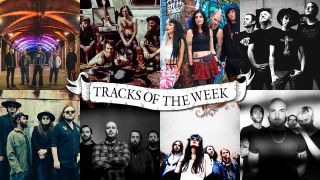 Here we are, good peoples, ready to present you with another bunch of quality new rock tunes. Loads of you voted in last week’s poll, and below are the bands you voted into the top three:

Congratulations to Northward, who emerged victorious by a comfortable margin! Now, let's take a look at what the great bread basket of rock has to offer this week. You know what to do; listen in, judge accordingly, then vote for your favourite at the foot of this page. But first, how about a spin of last week's first prize winners Northward? Oooh go on then...

This is probably our favourite track from these British rock’n’rollers’ debut (Before Dark Clouds, out now), so we were delighted to see they’ve released it as a single. A warm, rousing earworm of a tune – essentially an upbeat ballad – it blends vintage rock guitar and organ tones with soulful but fresh-sounding vocals (singer David James Smith has been compared to Paul Rodgers with good reason). Definitely one for fans of Free and Bad Company.

All Them Witches – Diamond

Another album highlight, this time from Nashville psych-rock adventurists All Them Witches. A hooky, quietly menacing highpoint from the forthcoming ATW (self-produced this time, following last year’s Sleeping Through The War produced by Dave Cobb), this is a charismatic example of the deliciously trippy darkness these guys can do so well.

Hands Off Gretel – Kiss Me Girl

If Gwen Stefani had a baby with Nirvana, it might’ve turned out like Hands Off Gretel. Which, if this is any indication, is basically a very good thing. Kiss Me Girl is a distorted, pulsating cocktail of power pop, grunge and punky hints – laced with sugar and sapphic debauchery.

It's curious to think that these guys (from Spokane, Washington) started as a one-night-only Bowie tribute act. They still peddle some of those glam roots, mind you, but here it's mixed with hints of alt roots, early '00s guitar band drive and a sound underlay of pop. 'Born in the wrong time', though? Hmm, I dunno, we're pretty happy to have 'em around today...

Next up we’ve got a live tune from Greek riffmongers Planet Of Zeus. Taken from their album Live In Athens, this is a pleasingly filthy shot of metallic, swaggering hard rock, complete with shouty chorus and wah-infused guitar solo. Not hard to see why the heaving, sweaty crowd is going absolutely apeshit. Opa!

Marcus King is only 22, but he sings and plays with the heartfelt worldliness of someone much older. One of the more chilled tunes from upcoming album Carolina Confessions, Where I’m Headed is a gorgeous swirl of brassy soul, Southern rock and acoustic layers. Both contemplative and uplifting.

Sounding rather like the fierce, present-day lovechild of Muse and Queen, this number (from Norway-based progsters 22) blends techy math rock and operatic sensibilities into one melodic, hard-hitting package. Like a musical theatre show about robots. Or astronauts. Or something like that. Check out more on the full, conceptual album You Are Creating.

To finish, how about a bit of His Darkness Satan for your weekend listening? Channelling the noisiest side of The White Stripes and Graveltones - all those juddering guitar shrieks and offbeat blues vocals - this is an assured, contemporary hit of garage rock and raw blues.