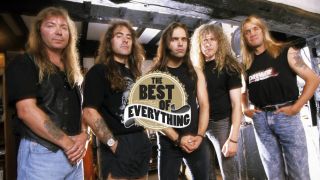 It was a tough job. When Blaze Bayley succeeded Bruce Dickinson as the singer in Iron Maiden in 1994, he was replacing the irreplaceable.

It wasn’t just that Dickinson was the best metal singer of his generation. It was what Maiden had created with Bruce – a series of legendary albums, from The Number Of The Beast to Seventh Son Of A Seventh Son – that had made them one of the biggest and greatest metal bands of all time.

“Joining Maiden was pretty daunting,” Bayley says. “But it was also an amazing opportunity for me.”

Bayley made two albums with the band – The X Factor in 1995, and Virtual XI in 1998 – before Dickinson’s return in 1999. And while those two albums never matched the classics that Maiden recorded with Bruce, the band have always stuck by them. As guitarist Janick Gers told Classic Rock last year: “We did some fantastic stuff with Blaze.”

For his part, Bayley says simply: “I was a fan of Iron Maiden before I joined the band, so I felt I had this rare perspective. I was somebody who knew why the fans loved Iron Maiden. I loved the music, I understood it, and I’m very proud of the great songs we made together.”

And here they are, in ascending order: The 10 Best Iron Maiden Songs Sung By Blaze Bayley…

10. THE AFTERMATH
Iron Maiden have as many songs about war as AC/DC have songs about rock’n’roll and Judas Priest have songs about heavy metal. The greatest of Maiden’s war stories is The Trooper. More profound is The Aftermath, from The X Factor. In its sad melody are shades of Priest’s Beyond The Realms Of Death. In the lyrics, grim visions of mutilated bodies in muddy trenches. It’s heavy shit.

9. VIRUS
On Maiden’s first anthology, Best Of The Beast, released in 1996, was this one new track. There was a raw edge, a sense of menace, in way the band played it. And the lyrics – “Rape of the mind is a social disorder” – were delivered by Bayley with searing conviction.

8. THE ANGEL AND THE GAMBLER
Oddly, the longest track on Virtual XI, at just a few seconds under ten minutes, is also one of the catchiest tracks that Maiden have ever recorded – similar in its rhythmic feel to the 1984 classic 2 Minutes To Midnight. Despite its flaws – a naff keyboard sound, and a vocal refrain that is needlessly repeated – The Angel And The Gambler has a great groove, some killer lead guitar from Dave Murray and Janick Gers, and just the right amount of attitude in how Bayley delivers the verses.

7. 2 A.M.
In this long-forgotten song from The X Factor is a haunting melody, and in its dark-night-of-the-soul lyrics, words that would come back to haunt the man who sang them: “Trying hard to see/What is there for me/Here I am again/On my own.”

6. BLOOD ON THE WORLD’S HANDS
Buried deep on The X Factor is one of the heaviest of all Maiden songs, with an absolutely genius riff, hammered out with drummer Nicko McBrain at the top of his game. Blood On The World’s Hands, as that title implied, also featured one of Steve Harris’ heaviest lyrics, and Blaze got deep inside it.

5. COMO ESTAIS AMIGOS
This was, for Blaze Bayley, the most meaningful song he ever recorded with Iron Maiden. A power ballad, albeit in Maiden style, Como Estais Amigos was written in memory of the British and Argentinian soldiers who lost their lives in the Falklands War. The song’s title translates as “How are you, friends?” Bayley’s lyrics were poetic: “Shall we dance a dance in sunlight/Shall we drink a wine of peace.” And he sang those words beautifully.

4. MAN ON THE EDGE
The belief that Steve Harris had in Blaze Bayley was never more powerfully illustrated than when Man On The Edge was released as the first single from The X Factor, the flagship song for the new Iron Maiden. Harris had written so many of the band’s most important songs, but this one was co-written by Bayley and Janick Gers. “I wrote all the lyrics and the melody,” the singer says. “And the fact that one of my ideas was chosen to be the first single from the new album meant so much to me.” Bayley’s lyrics were inspired by the 1993 Michael Douglas movie Falling Down, the title of which was repeated in the chorus. And while Gers’ music had the cut and thrust of vintage Maiden, there was, in the way Bayley sang it, an echo of his former band Wolfsbane.

3. FUTUREAL
The opening salvo from Virtual XI is a song that Blaze still sings to this day in his solo gigs. It’s three minutes – dead on – of classic, up-and-at-’em Maiden.

2. SIGN OF THE CROSS
It was a big song and a big statement, the monolithic 11-minute track that began The X Factor and set the tone for a dark and intense album. Bayley describes Sign Of The Cross as “a massive, defining song”, and for this version of the band it was. Written by Steve Harris alone, it was based on the 1986 movie The Name Of The Rose, set in mediaeval times, in which a friar, played by Sean Connery, investigates a series of grisly murders at a monastery. The sinister atmosphere in the film is evoked in the song’s heavy drama, from Zeppelin-esque riffing a huge chorus that Bayley nails with real gravitas.

1. THE CLANSMAN
The greatest song from the Blaze era is a genuine Maiden classic – an epic piece from Steve Harris in the style of previous landmark tracks such as Rime Of The Ancient Mariner. In writing The Clansman, Harris was inspired by the 1995 blockbuster Braveheart, starring and directed by Mel Gibson: an historical drama set in the 13th Century, in which Gibson portrayed the warrior William Wallace, leader of the First War of Scottish Independence against the English. It’s a mighty song in the classic Maiden tradition, with an appropriately galloping riff and a beautiful melody that was – in unlikely first for Maiden – sampled in the 2004 hit I Tried by American R&B star Brandy. Bayley says that in Maiden he found “another area of my voice”. The Clansman is testimony to that. So powerful was this song, and Sign Of The Cross, that both remained in Maiden’s live set after Bayley made way for Dickinson’s return.

The 11 best Iron Maiden songs based on history