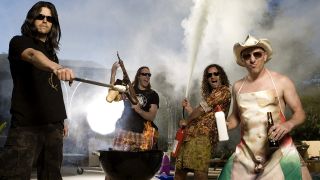 Tool have told how a joke made by guitarist Adam Jones led to the latest round of album rumours.

Speculation over the status of the follow-up to 2006’s 10,00. Days went into overdrive again last week after a fan reported that Jones had told him work had been completed on the project.

But it turns out a light-hearted comment made in Portland, Oregon, had been taken out of context.

Jones tweeted that his full comment was: “The record’s done and it’s coming out tomorrow – just kidding…”

The band added an official statement saying: “Adam, in a private conversation with fans attending the Portland Tool concert, joked the band’s new album was not only finished but coming out the next day.

“Unfortunately his off-the-cuff joke was taken out of context. Work on the forthcoming album is ongoing, and as soon as it is done, trust us, we will be the first to let everyone know.”

Tool have gone public over the most recent rumour about their next album – confirming that, despite reports to the contrary, it’s nowhere near finished yet.