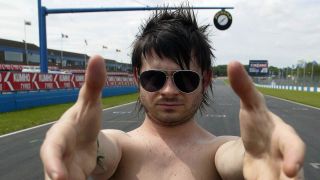 The early 90’s was a fertile breeding ground for the New York Hardcore scene. Sick Of It All, Biohazard and Madball hit commercial heights previously unheard of by this ultra-aggressive form of bulked up punk rock. It had the power, the speed, the heaviness and the swagger to be beloved by both metalheads and skaters. What this music lacked however was, well, a little sensitivity, a bit of reflection, a touch of melody. Until Life Of Agony came along…

Ostensibly LOA would have sat easily with the Agnostic Fronts and the Vision Of Disorders of this world, with their crossover thrash riffs and two-step rhythms, if it were not for one person; vocalist Keith Caputo. Here was someone within the hardcore scene that could actually sing, not bark or growl, but genuinely sing. These scene oddities were picked up by Roadrunner Records, who released debut album The River Runs Red in 1993. Right around this time Nirvana were the biggest band in the world and all manner of alternative sounds were starting to creep into the mainstream. Caputo and Life Of Agony seemed to have a better chance than most at breaking through to a similar audience, the wounded lyrical introspection of the album aped that of Cobain’s most pained outbursts (as the title track’s opening line “I got the razor on my wrist and I can’t resist” testifies). It’s a dark and bleak record, tempered by the fact that guitarist Joey Z can pin a hell of a blistering lick in his sleep.

1995’s Ugly followed in much the same vein, and LOA began to cultivate a reputation as one of metal’s premier moribund, crossover merchants. Before Korn et al took soul-bearing honesty to the metal masses Life Of Agony were seen as the sensitive band that it was okay for metal fans to like. The creative high point of the band was reached with 1997’s Soul Searching Sun, a beautiful record that eschews the beat down bravado of hardcore for the shimmering piano ballad Desire and regret-tinged slide guitar, downer of Heroin Dreams, whilst still finding time for groove-laden bangers like Weeds and Whispers. As eclectic as it was, it was still too much for Caputo who bailed the band mid-tour citing his disillusionment with the rock world, and went solo, recording the almost fully acoustic Died Laughing solo album. Which, although full of merit, was a step too far for many LOA fans.

The band continued on, recruiting former Ugly Kid Joe frontman Whitfield Crane. A move that seemed odd on paper and turned out to be even odder in the flesh. This version of the band played one UK date, drawing the short straw of having to follow Pantera during the inaugural Ozzfest in 1998 at the Milton Keynes Bowl, where the party-loving frontman climbed the rafters and shook his bottom along to these deeply personal and introverted songs. It was weird, the vibe of the band unrecognisable, he was gone within a year and Life Of Agony never recovered, splitting a year later to barely a shrug from the nu-metal obsessed rock world.

The classic line up reformed three years later, releasing a decent comeback album Broken River in 2005 and playing the odd sporadic tour or festival run, and then split again in 2011 after recording sessions for another album were shelved. Caputo then revealed an intention to transition from male to female and is now known as Mina Caputo.

Those with a keen eye will have noticed Life Of Agony’s name on the bill at this year’s Hellfest. A chance potentially to see the band return to UK shores for the first time since Caputo’s transition. If so it will be a fascinating chance to see an enigmatic singer, who Corey Taylor has cited as one of his favourite ever vocalists, a band that bridged the gap between hardcore, metal, alt-rock and nu-metal and a set of songs that could have been as big as the personalities that created them. Get involved now.