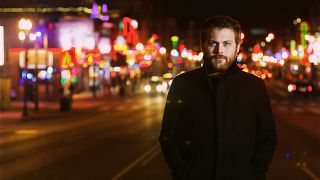 In the summer of 2012, the then 21-year-old vocalist with British metalcore band Asking Alexandria posted an extract from his (as yet unpublished) autobiography on his Tumblr account: “My name is Danny Worsnop,” it began. “I was born on September 4th, 1990 in Beverly, England. I entered this world kicking and screaming, knowing nothing of how fucking important my being alive was going to be to so many people.”

It’s an attention-grabbing introduction: cocksure, arrogant, self-obsessed and entirely consistent with how a snotty 21-year-old kid with the world at his feet might feel.

The previous year, Asking Alexandria’s second album, Reckless & Relentless, had made it into the US Top 10, making the young Yorkshireman one of the hottest properties in modern rock. It would be fair to say that Worsnop took full advantage. Enthusiastically aping the lifestyle of his heroes Mötley Crüe and Skid Row, the singer squired strippers and models, developed a serious cocaine habit, brawled with bandmates and strangers alike and generally got a reputation as a don’t-give-a-fuck rock’n’roll wild man hell-bent on self-destruction.

That the polite, well-groomed, courteous Danny Worsnop sipping water in an upscale West London hotel this afternoon doesn’t quite tally with that image is entirely deliberate, because in the past twelve months, Worsnop has taken huge strides to clean up and banish his internal demons. The way he describes it, it was a simple question of choosing either life or oblivion.

Over the course of our 45 minutes together, Worsnop uses terms such as “weird”, “eccentric”, “egomaniac” and “batshit crazy” to describe his own personality. But his new-found sobriety has given him a clear-eyed and brutally unromantic perspective on the world in which he operates. And the picture he paints is not a pretty one.

By his own admission, Worsnop became famous way too young.

“People shouldn’t have that kind of attention and money at that age. It’s just stupid,” he says bluntly, tugging the sleeves of a crisp white dress shirt down muscular, heavily tattooed arms. “And especially when they have mental problems like me. Rock’n’roll is probably the worst environment I could have grown up in.”

From childhood, Worsnop considered himself “a very troubled person”. Now resident in Nashville, he recalls feeling out of place in rural England. He was “self-medicating” long before his teenage years, smuggling alcohol into school to make classes more bearable. By the time he moved to the US with Asking Alexandria in his late teens, Worsnop was already a full-blown alcoholic. When the band’s career took off, he “wasn’t sober for three whole years”.

“I’d read [Mötley Crüe biography] The Dirt and thought: ‘This is how it goes,’” he admits. “And it’s fun for the first five minutes. And then you end up in a really bad, really dark place. It’s not glamorous when you’re on day four of a bender and you’re on your hands and knees scouring your entire house with a credit card just to get another bump of cocaine, snorting lint off your floor at four in the morning.”

Worsnop can now see he was “impossible to talk to or deal with”. “People wouldn’t deal with me because they knew it was going to blow up,” he says. “They just wanted to get far away from the explosion.”

More disturbingly, he alleges that his behaviour was indulged, even encouraged, because his ‘rock star’ image was a marketable selling point for his band. “My headlines were creating revenue,” he says. “People were watching a man spiral downwards into complete self-destruction, but they’re cashing big cheques at the same time. Business is business.”

Asked if he resented this attitude, his reply, with a fixed look from unblinking eyes, is: “Absolutely. And I do now more than ever, because now I’m out of it I can really see it. Because at the time, I was cashing big cheques too, so I was like: ‘Sweet. I can afford a whole bunch more cocaine now.’ But it was terrible. Even when they were disguising trying to help, they were enabling me the entire time – the tour bus and venues would be just full of girls and drinks and drugs.”

By the end of 2014, Worsnop had decided that, for his own sanity, he needed to walk away from the band. Asking Alexandria guitarist Ben Bruce broke the news to fans in a Facebook post on January 22, 2015, announcing that Worsnop was quitting “to pursue other musical interests”. While it’s true the singer had committed to making a record with his hard-rock band We Are Harlot, he flatly denies that leaving Asking Alexandria had anything to do with ‘creative differences’.

“It was entirely about removing myself from that toxic environment,” he explains. “At the time, the band was fighting permanently. And I’m not talking verbally – it was fist-fights every single day. And I was subconsciously trying to kill myself with the amounts of intoxicants I was putting into my body. I just had to get away from it. I was still getting fucked up at the time. I think I was high when I made the phone call. But it was the first step in the right direction.”

Ultimately, it wasn’t rehab that inspired Worsnop to make changes in his life, but a new relationship. In 2016 he met country singer Sarah Ross in a bar in Nashville, and the pair hit it off instantly. The pretty, petite brunette is here with him in London today, and his face lights up visibly when she’s in his eyeline. He concedes, though, that Ross was “definitely scared” at their first meeting, “and still is to some degree. She talks about the first time we met, and says: ‘You were dead inside.’ She remembers my face being grey, my eyes being glazed over and my lips being blue, and she thought: ‘That guy has problems.’”

For Worsnop, the key to unlocking these problems lay in songwriting. In Nashville he began working on a solo record, originally called The Prozac Sessions. That music has now been released as The Long Road Home. A graceful, understated country-rock collection, it’s unflinching in its depiction of the singer’s darkest hours. And without a trace of hyperbole, he says it is “probably the sole reason I’m even here at this point”.

Danny Worsnop is sharper than you might imagine. And, now, much more likeable. He’s in demand, too, back in Asking Alexandria (“It was something I felt I could do again”), writing for a new We Are Harlot record, and regularly being offered film and TV scripts. But when you hear him say there’s “no one” he can trust in this industry, that he has zero contact with his parents, that he almost lost everything after a “breakdown”, you can’t help but be a little concerned that the road ahead may yet prove challenging again.

His as yet unpublished autobiography has the working title Am I Insane?. Crucially, though, Worsnop says he has now “finally” come to like himself, insisting: “This is the best I’ve felt in forever.” Asked if he might not be healthier walking away completely from the world he still inhabits, he laughs and admits he has thought about it, but that he is “physically incapable”.

“I’ve thought about faking my own death, changing my name, moving to Africa – I’ve had a million ideas,” he says. “But when it comes to pulling the trigger, I’m so in love with this business. I’m an entertainer, I have to do this. This is who and what I am. For all its nasty sides, this business enables me to be me.”

The Long Road Home is out now via Earache.

We Are Harlot 'blindsided' by Worsnop Asking Alexandria return