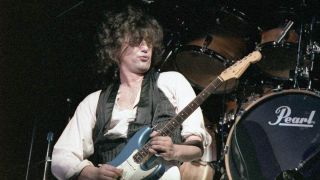 Though it’s hardly controversial to suggest Jimmy Page never quite re-achieved the dizzying heights attained during his time with Led Zeppelin, the bar was set so high, nor did any other guitarist who ever lived. That said, Page’s post-Zep career has provided a rich – if sporadic – body of work, broad in range and tone. Here’s 10 of the very best songs.

Along with three other new Moroccan-influenced tracks on Page and Plant’s No Quarter (City Don’t Cry, Wonderful One, Wah Wah), the original title meaning ‘hurry up’ in Arabic was jettisoned by the time of 2004’s reissue in favour of The Truth Explodes. Plant revisits the opening wail of Immigrant Song in a manner more befitting middle-age, and Page’s dirty circular riff sits tight with the drum loop before disintegrating into stuttered noise.

While the jury’s still out whether the flat, percussive tones of the 22-hole Ovation acoustic guitar have stood the test of time, there’s no doubt they afforded a versatility for early adopters Roy Harper and Jimmy Page. Thematically a descendent of Zeppelin’s Gallows Pole, this unhappy tale of a man’s impending noose-bound death sees both guitarists trade licks supplemented by Page’s dark electric fills. A car-crash performance of this song halfway up a mountain for the Old Grey Whistle Test is hilariously recounted in Mark Ellen’s Rock Stars Stole My Life book.

Partially cooked up by Page’s neighbour Michael Winner and Peter Grant as a possible path back to creativity after the psychic aftershock of Zeppelin’s demise, the Death Wish II soundtrack’s standout track is a plaintive, melancholic solo. Perhaps proving the old adage regarding leopards and spots, while it’s credited solely to Page, it’s basically Chopin’s Prelude No.4 In E Minor on guitar, though presumably that lawsuit is well beyond the statute of limitation.

An emotive and symmetrical instrumental arc, heavily textured and layered, Page crams a succession of moods and sections into just over three minutes, compacting a range he’d have spread over eight in Zeppelin days. Arguably his best post-Zep solo, the flattened key shift at the two minute mark opens the track like a book and unequivocally illustrates the deep, deep well of magic still within drawing level.

Another leftover riff, this time from the In Through Out Door sessions, Page hits the ground at speed with a melodic nod to Nobody’s Fault But Mine. Some tightly-weaved syncopated rhythm section work provides a bedrock for the re-introduction of the initial riff, seamlessly floating back in and out. David Coverdale bemoans the distinct lack of lemon-squeezing on offer from the unnamed female, lamenting the fact despite being told once and twice, he’s still subject to a tirade of door-kicking, bed-wrecking and general tree-shaking.

With both Page and Paul Rodgers keen to distance themselves from any musical hangovers from their prior careers as they concentrated on The Firm, they play this underrated classic with a straight bat. Managing to incorporate 80s synths in an understated fashion, Page supplies a straightforward chord structure and a restrained handful of arpeggios before showing a bit of leg in the solo. Relaxed, well structured and confident, it plays to strengths previously unrevealed.

An incredibly exuberant delta-blues on steroids, and as transparent as Coverdale’s Plant impression is – not to mention Page’s own sentimental journey – it never hurts to give the people what they want. The enthusiasm is infectious, the performance bang on it, and Page also supplies some super-charged harmonica and a layer of Appalachian dulcimer to beef up the gumbo. Top drawer.

Chock full of imperiousness and grandeur – in contrast to the rest of Page and Plant’s Walking Into Clarksdale album – this Grammy-winning slab of looped power channels the spirit of Kashmir and moves it 6,000 miles west to North Africa. Hard to listen to without thinking ‘what if…’, it’s no stretch at all to imagine it being on Physical Graffiti.

The eventual incarnation of a group of ideas (provisionally titled Swan Song) Page had had in his back pocket since 1974, for various reasons – usually because of more realised material already on the table – it never made the cut for any Zeppelin album. Epic in scope, almost prog-like in its sections and dynamics, though mildly tarnished by unfortunate era-specific fretless bass, Page’s intricate reverb-drenched acoustic work in the middle section is among his most ambient, recalling Ry Cooder and Michael Hedges.