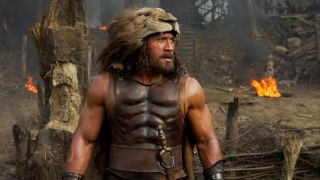 If you don't like The Rock then there's something wrong with you. It's true, we asked a doctor. He's the best wrestler ever and THE BEST ACTOR EVER OKAY SHUT UP. His latest film, Hercules, is out this week, and it's quite good. We're not sure how good it would have been had The Rock not been in it, but still. We're also pretty sure there's a metal hammer in it somewhere, but that could just be wishful thinking. Either way, here are the ten most metal things about Hercules...

The Rock Is In It

As we mentioned above (read again if you missed it), The Rock is sodding DECENT. He’s massive and has a loud voice and beats up so many people that you wouldn’t believe it. Also, his WWE theme song is still one of the best things to ever come into our ears.

He Has A Big Club That He Hits People With

You know, you think of swords and sandals epics and everyone’s got swords (obviously, they go with the sandals), or spears, or bows and arrows – not Hercules, he’s got a big-arse club with spikes in it. It doesn’t get more metal than that, in our opinion. Apart from the fact that it’s made of wood, of course. But ignore that and focus on all the smashing.

There’s A Main Character And All He Does Is Scream

One of the MAIN characters doesn’t say anything. He just screams. That’s it. He has no words. Just screams. Might as well form a death metal band to be hones… apart from the whole flipping his lid and killing everyone in sight with an axe thing. Actually, that might legitimise his image a bit.

The Rock Flips A HORSE

There’s a bit where a bloke on a horse nails it towards The Rock at top speed and he just steps to the side and flips the whole thing hoof over tit. It’s brilliant. And he doesn’t even get arrested. Last time we flipped a horse we got arrested. We also got covered in fresh manure, but that’s another story for another top ten list.

The top ten times we got covered in horse shit, to be precise.

People Eat Meat Like It’s Going Out Of Fashion

Vikings have horrendous table manners, they always seem to eat meat off the bone like they’re a rabid wolf or something. Ever heard of a knife and fork? Sheesh. We can imagine this is what dinner time looks like round Turisas’ house.

It’s The Most Violent 12A We’ve Ever Seen

Now, there is nothing, and we mean NOTHING metal about the 12A rating. It’s the worst of all the ratings, but if you’re gonna make one, at least make it the most violent one anyone’s ever seen. That goes some way to making up for things. So it’s for kids, but it’s a bit metal. Like Babymetal? Okay, not as good as Babymetal.

WE WERE UP SO LATE THE NIGHT BEFORE GOING MENTAL THAT WE FELL ASLEEP FOR FIVE MINUTES DURING THE FILM. Pretty fucking metal, right?

We don’t need to tell you that fire equates to metal quite easily. Well, there’s a ton of fire in Hercules – flaming arrows, flaming staircases, even flaming CANDLES. At the end of the film there’s so much fire you can almost smell what The Rock is cooking…

There Are Some Giant Monsters In It

Giant monsters are cool, right? Just look at Gwar. Exactly. Well there are some big giant monsters in this. The only thing is, you see them all in the trailer and they’re all within the first five minutes of the film. THE TRAILER IS A BIG LIE. (Oh yeah, spoiler alert or something.)

The Armour Is, Erm… Made Out Of… Err… Metal?

Yeah, we’re feeling pretty tired still (see number seven on this list) so we couldn’t really be bothered to come up with a tenth one. This one’ll do, right? It’s certainly true, and we’re not in the business of lying. Not like the stupid trailer, anyway!

Hercules is out Friday 25th July.