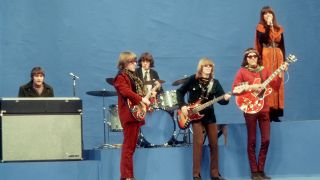 The story behind the song: White Rabbit by Jefferson Airplane

“We are the people our parents warned us about,” Grace Slick yelled in the 60s. As the bluff lead singer with San Francisco band Jefferson Airplane, no-one embodied the free-thinking spirit of the times like she did. And if one song came to define the Haight-Ashbury counter-culture itself, it was Airplane’s White Rabbit.

Released in the loved-up summer of 67, its heavy allusions to the altered states in Lewis Carroll’s Alice’s Adventures In Wonderland, along with its exhortations to ‘feed your head’, seemed to invite a whole new generation to trip out on the pleasures of psychedelics. For those for whom love, peace and LSD were inseparable, it became an anthem. “It was timely for the era,” Airplane founder Marty Balin admitted years later. “The myth, the idea, the acid.”

But there was more to White Rabbit than that.

“It wasn’t actually a big hit,” Airplane bassist Jack Casady recalls, “but it was within the culture of the times. It became the signature for the people who were doing the things it had reference to. But does it work on different levels other than just a drugs song? Yeah, it does.”

Slick herself always maintained that White Rabbit was aimed at hypocritical parents and their habit of reading drug-laced stories to children at their most impressionable age.

“In all those children’s stories, you take some kind of chemical and have a great adventure,” she told writer Mark Paytress. “Alice In Wonderland is blatant. Eat me! She gets literally high, too big for the room. Drink me! The caterpillar is sitting on a psychedelic mushroom smoking opium!”

She also argued that the song was about the importance of education: ‘Feed your head,’ the rousing climax to White Rabbit, was intended as a call to liberate brains as much as the senses.

Slick wrote White Rabbit at home in Marin County a year earlier, on an upright piano with missing keys, at the end of an acid trip during which she listened to Miles Davis’s Sketches Of Spain for 24 hours straight. Then she presented it to her then bandmates, San Francisco raga-folk avatars the Great Society. Also in that band were Grace’s drummer husband Jerry, brother-in-law Darby Slick [lead guitar], Peter Van Gelder [bass] and rhythm guitarist David Minor. According to the latter, who began as the Great Society’s chief songwriter, White Rabbit was an answer to a call.

“When we started working, nobody had anything because I couldn’t write any more,” he recalls. “I was too busy keeping up with my various jobs. So Grace’s husband Jerry challenged them: ‘What are you gonna do? Let David write all the songs?’ Y’know, ‘Do something!’. So Darby came back with a couple of songs and Grace came back with White Rabbit.”

At six-minutes-plus, the original version of the song was much trippier, and nearly three times as long, as the Airplane’s single version; it was Eastern-flavoured, with an improvised raga intro, and Slick’s vocal was less stately. But the Spanish march and echoes of Ravel’s Bolero were already there.

“People talk about one of the wonderful things we did was play Bolero,” says Minor. “But to me there’s no difference between covering jazz and covering Little Richard. It all comes from a similar root.”

Live on stage, White Rabbit became a part of the Great Society’s set. By then, though, the band were having problems. Grace and Jerry’s marriage was starting to come apart, and Darby was getting deeper into drugs. Then came a benefit show at San Francisco’s Fillmore in September 1966. Sharing the bill with the Great Society were Jefferson Airplane, then looking for a new singer. Jack Casady had seen Grace several times and wanted her in.

“I liked Grace’s singing because we wanted a good, aggressive singer for the band,” he says. “She had a unique timbre and sound to her voice; Signe [Anderson], who was our first singer, came out of a folk background and had a contralto voice with smooth harmonies. What I like about Grace was the fact she stood right at the end of the stage and made good contact with the audience. Paul [Kantner] had put the vocal sound together for the first year of Jefferson Airplane, where it had the smoothness of his influences in folk music. I liked the individual sound to Grace’s voice, so I asked her to be in the band. This was the girl. Also, her attitude was very different. She didn’t have a submissive attitude at all, which is what we wanted. We wanted an equal in the band, someone you could work off, someone with fire in their eyes.”

Airplane manager Bill Thompson bought out Grace’s contract for just $750 and Slick was in, replacing the purer folk tones of Anderson with a more strident, punky approach. The following month the band set out for LA to start work on their second album, Surrealistic Pillow.

“We recorded it out at Sunset and Ivar, in a huge room at RCA where they used to record A Hundred And One Strings. The room was massive, so we basically set up the instrumentation in the middle of this room and played it live onto four-track. It was very simple to record. I just led the song out as a bass part like Bolero, ripping off Ravel. It was all slow and slinky, it gave us the atmosphere we wanted.”

With the Grateful Dead’s Jerry Garcia credited as ‘musical and spiritual advisor’, the album was a huge success, peaking at No.3 on the US Billboard chart and sealing the Airplane’s status at the forefront of the Bay Area bands. Oddly enough, the two major US hits it spawned were both brought in by Slick from the Great Society: Somebody To Love, written by Darby Slick, made the top five in February 67; White Rabbit, meanwhile, very nearly didn’t make it onto the album at all.

“Grace had two songs she brought with her from the Great Society,” says Casady. “But White Rabbit was the song we were going to leave off the album because we thought it would never get released, we thought it was going to be censored. It eventually became a big deal because it made it onto the album, then got dispersed into the crowd whenever we played live. Otherwise, it was just a little two-and- half-minute song that was kind of a lark.”

Grace Slick is still synonymous with Alice’s Adventures In Wonderland. The perennial White Rabbit, regularly used on Hollywood film soundtracks, provides her with a comfortable income. Long retired from the music business, she now runs a one-woman art show in Malibu. Her most popular work, fittingly enough, is a series of paintings based on the Alice books. Feed your head.