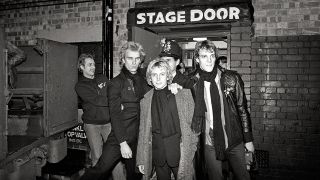 Second-album slump’ is one of the most dreaded phrases you can foist upon a new rock artist, as it can often equate to another unpleasant label – ‘career killer’. But this didn’t seem to cross the minds of The Police trio of singer/bassist Sting, guitarist Andy Summers and drummer Stewart Copeland when they began thinking about a follow-up to the band’s hit debut album Outlandos d’Amour (which had spawned hit singles including Roxanne and Can’t Stand Losing You).

“What was interesting about Sting as a songwriter was he actually had a lot of these songs [already],” Summers recalls, “and he had a whole book full of lyrics. He had this giant book – a big, thick, hardbound book – with pages that had lyrics all the way through it. He didn’t come into The Police and start writing songs – he had been writing them for years. And I think he would just keep going back into this giant book of lyrics and keep pulling them out. So we never really ran out of material. He’d go: ‘Well, I’ve got this other one.’ ‘Another one?!’”

It was this book that facilitated the creation of one of The Police’s all-time classic tracks: Message In A Bottle, taken from their second album, Reggatta de Blanc, released in 1979.

“Really, the process was about: how could we take some of this basically raw material and ‘Police-ify’ it – make it sound like the way we sounded,” explains Summers. “Which was of course the unique chemistry between the guitar, the bass line, the high vocals that Sting had then, and Stewart’s unique drumming. Never to be repeated. So I can’t really specifically remember what we went through once we got going on it, but we must have tried it a few times.”

As with all of The Police’s hits, Sting is listed solely as the song’s author. But according to Summers, he and Copeland helped shape the final track.

“We all had ideas. It was very collaborative. I think we had already found our way. The thing between Sting and I, we grew up listening to very much the same kind of music, which was a lot of jazz – a lot of Miles Davis, a lot of Thelonious Monk – and also being exposed to The Beatles, blues and everything. Our tastes were very much in the same place.”

With these shared musical tastes, Summers quickly realised that he had found the perfect songwriting partner. “I could play these more off-the-wall voicings on the guitar and he wouldn’t flinch – he’d just sing right through it,” he says. “I mean, a lesser-talented singer would have said: ‘What’s that kind of weirdness you’re playing there?’ It really opened it up for me as a guitar player because I played a lot of classical guitar, studied jazz, played all kinds of stuff.

“The Police was really the crucible where it all came together. It was the right melting pot for the guitar skills that I had, with a singer who had the ears for it. So that’s why it was so unique. There’s no formula for it. Three very different people that came together at the right place. Stuff that you wouldn’t think would go together, but of course it made that unique sound.”

It didn’t take long for them to realise that with Message In A Bottle, they had something special on their hands.

“I’ve always thought it was the greatest drum track that Stewart ever made, personally,” Summers says. “Really alive and interesting. I do remember we were recording on the outskirts of London in this little studio [Surrey Sound Studios, with producer Nigel Gray], trying to put our stuff together. Two A&R guys came down from A&M Records, sat down on the couch, we put that song on, and they were just smiling as widely as they could, because it was a killer track.”

Released as a single a week and a half before Reggatta de Blanc (on which it was the opening track), Message In A Bottle was an immediate smash in the UK, becoming the group’s first No.1 single. Subsequently it also topped the charts in Ireland and Spain, but reached only No.74 in the US – which would eventually become one of The Police’s strongholds (it wasn’t until 1983 that the trio hit No.1 in the US, with Every Breath You Take).

“We were very lucky, and it all went from there – very quickly,” Summers remembers about their rise to success and stardom. “We had about a year, and then it all happened. At first we couldn’t get anything, and then one year later, after we did a little tour of the East Coast of the US, it exploded in the UK.”

Following the success of Message In A Bottle, Reggatta de Blanc also reached No.1 in the UK, as did their next single, also from the album, Walking On The Moon. The Police embarked on a worldwide headlining tour in support of the record, which included visits to places not usually associated with rock’n’roll at the time, such as India, Hong Kong and Egypt. Today, almost 40 years on from when they first recorded it, how does Summers rate Message In A Bottle among all the other Police classics recorded between 1978 and when the trio disbanded in 1986?

“It’s my favourite, actually,” he says. “It’s the one that’s highly recognisable as The Police. I still love it. I think it’s a great classic, and a very different-sounding pop song. For me it’s the best of The Police. There are a lot of other great tracks, but I’ve always particularly liked that one.

“When I do solo shows, we play that at the end and everybody goes nuts. In fact, with the Police reunion tour [which toured the world in 2007-2008], we opened with it, because it’s such a signature. I’d have to go up on stage alone, playing that guitar riff, and the others would join in. It was pretty nerve-racking.”

The B-side of Message In A Bottle is Landlord, one of the more obscure Police tracks, which never appeared on a studio album.

“It was very early days, because I just got into the band,” Andy Summers remembers of the song. It was more of a punk thing. Which wasn’t really – ultimately – our style at all. But we came together in the absolute ferment of the raging punk scene in London, and that was kind of the material we played in the first few months. Once we really got to officially be a band with me in it (Summers replaced Henry Padovani in August ’77) and start rehearsing, of course, it all changed, and we got into the sort of ‘classic Police sound,’ and we didn’t really play songs like Landlord much after that. To me it’s a very early, crude Police song – it’s not the real Police, if you’d like.”

PRODUCER - Nigel Gray and The Police

The Story Behind The Song: Fox On The Run by Sweet

The Story Behind The Song: The Killing Moon by Echo & The Bunnymen

The story behind the song: I Don't Want To Miss A Thing by Aerosmith