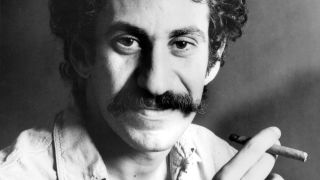 With his big old moustache, Roman nose and dark eyes twinkling from a lived-in, olive-skin face, Jim Croce looked like one of the good guys whose families went to America as immigrants, seeking neither fame nor fortune but just a fair crack of the whip. Driving a truck and favouring the blue-collar, sweat-and-smoke image, singer-songwriter Croce was no pin-up. He was regular people.

By the time he reached 30, Jim was doing good. In July 1973, his funky Bad, Bad Leroy Brown was No.1 in the US and he was booked on an endless tour of coffee-house and college shows that helped spread his reputation as the Next Big Troubadour Thing. That month he drew 12,000 to the Ravina Folk Festival outside Chicago. Good news for his wife Ingrid, struggling at home with the bills and a toddler while Jim was on the road. Her old man was about to hit pay dirt.

It never happened. At least not while he was alive. On September 20, 1973, a chartered small plane attempted to take off in thick fog from Natchitoches in Louisiana, bound for Sherman, Texas. On reaching the end of the runway, the pilot suffered a heart attack and lost control of the aircraft, which skidded into a tree and exploded. Everyone on board perished, including Croce and his right-hand man, guitarist Maury Muehleisen.

That night, and only an hour before the crash, Croce had played a gig at the local Northwestern State University in front of a sparse crowd. For the encore he introduced a new song called I Got A Name, which had just gone to airplay. It sounded like vintage Croce, mixing overt sentiment and American-flavoured references, but it wasn’t one of his originals. The song was punted his way by the successful writing team of Norman Gimbel and Charles Fox, who were basking in the enormous sales of Roberta Flack’s version of their Killing Me Softly.

In June, a rather hesitant Croce cut the track in two takes. Producers Terry Cashman and Tommy West were insistent he put down his acoustic guitar – “lose the crutch” – and deliver the vocal stone-cold solo. Croce was anxious to record it, according to Gimbel. “His father had a dream for him, but died before Jim’s first success.”

The song was to be used as the theme song of the soundtrack to a movie, _The Last American Hero (aka Hard Drive_), starring Jeff Bridges and based on the life of stock-car racing driver Junior Johnson. It would also be the title track of Croce’s next album.

“Jim enjoyed the opportunity to sing for this particular movie,” Ingrid recalled. “Most people thought he wrote the song. I hate to tell them he didn’t, but he made it his own. Putting down the guitar was like losing a prop. His guitar was like the bar for a bartender. He enjoyed what was to be a brand new start – to use his vocals a different way. It’s one of the most powerful songs he does on the album.” Cashman was delighted. “We recorded it because Jim was going to get a lot of money if he cut the song. It was a different kind of animal. We did the backing tracks with the orchestration and recorded Jim’s voice afterwards. Maury had a big guitar part, so it sounded like a Jim song and it became one of his most popular records.”

AJ Croce, Jim’s son, family archivist and a fine musician in his own right, has tapes of the original recording banter, and video footage of his father at work.

“It meant a lot to him,” he says. “The content related to his own life as a first-generation Italian/American kid growing up in South Philly. Becoming a hobo gypsy musician wasn’t considered a respectable profession. Dad had a Master’s degree – he was the first one to go to college. His father thought he was throwing his life away. He had to fight the family to pursue his dream.”

AJ jokes that had the song been a hit in Jim’s lifetime, “Dad would have retired! He’d had some big records from 1971 on but hadn’t seen a dime. He worked solidly for 10 years before he got a break. But even though Operator (That’s Not The Way It Feels) and Leroy Brown were big, he’d barely opened the tap. He was pushed hard on the road but there were encouraging signs. He played the song on the _Midnight Special _TV programme, and had a stint as a guest host on Johnny Carson’s The Tonight Show. He was a very entertaining guy who seemed to be finding his own identity. Of course, he died before he saw the benefits of I Got A Name, and then Time In A Bottle, which seemed so prescient when it was re-released and became a posthumous No.1.”

According to AJ, his father took nothing for granted. During his July European tour, which included an appearance on The Old Grey Whistle Test (fee: £100) and a half-hour slot at the Cambridge Folk Festival, Jim wrote to the record company folks at ABC-Dunhill thanking them for “all your hard work, confidence and support… The Gold Records that Maury and I received are beautiful to look at, but even deeper than that is the sense of group accomplishment all of us share in seeing everyone’s hard work pay off in the form of a successful record. We all hope it’s the first of many.”

Thanks to its inclusion in Quentin Tarantino’s 2012 film Django Unchained, I Got A Name introduces Jim Croce to a new audience, doing for him what Tarantino did for Harry Nilsson and Stealers Wheel in Reservoir Dogs, and for Dick Dale in Pulp Fiction. The director describes it as “a lovely ballad and part of an eclectic soundtrack… a neat old-school song”.

Jim would have been delighted. He sang: ‘I got a name, I got a name/And I carry it with me like my daddy did/But I’m living the dream that he kept hid.’ Poignant and heartbreaking, this is Jim Croce’s finest moment.

I Got A Name is used “in the key montage when we were filming in South Louisiana, Mississippi and Tennessee,” says Quentin Tarantino, the director of Django Unchained. “Django has shaken off the last vestiges of slavery and become a bounty hunter: officially not just a man but also a free man. And a professional killer. A cowboy with a horse, a brand new saddle and a cool, groovy outfit, as opposed to the rags he’s been wearing. It’s an emotional moment, proud and touching.

“I’ve always loved the song, which was used in the opening credits of _Last American _Hero. I dove into my collection of vinyl and found the right song for the moment. It suits the rhythm, beat and flavour. That’s my record, complete with pops and cracks. I even kept the sound of the needle being put down. I want people’s experience to be like mine when they hear this soundtrack for the first time.”

I GOT A NAME