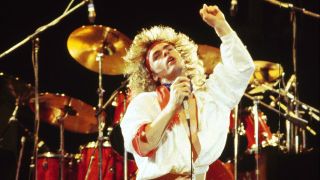 The New Wave Of British Heavy Metal certainly spawned its fair share of anthems during the early 80s – Maiden’s Running Free, Saxon’s Wheels Of Steel etc. One gem that tends to get overlooked is Diamond Head’s mighty epic Am I Evil. In fact, some believe it’s a Metallica song, due to that band having covered it on their 1984 EP Creeping Death and having played it live regularly ever since.

According to Diamond Head co-founder/ guitarist Brian Tatler, back in 1980 a lot of work and planning went into the making of what became a metal classic.

“I can remember wanting to write a song heavier than Black Sabbath’s Symptom Of The Universe,” Tatler recalls. “So when I came up with that riff, I think we all said: ‘That’s good. We should work on that.’

“The song evolved over a period of 18 months. We seemed to keep adding to it. We added the fast section, and then I must have come up with the intro – which was kind of based on Mars from The Planets suite [an orchestral work by Gustav Holst] – and that got sewn onto the beginning. I can remember coming up with the ending, and the very last thing to be written was the guitar solo section, where it changes key, and the tapping. I think we started it around 1978 and finished around 1980, when we went in to record the album [Lightning To The Nations, 1980].”

To match Tatler’s heavy riffing, singer Sean Harris came up with the suitably dark lyrics, which included the most extreme opening of any metal song up to then: ‘My mother was a witch/She was burned alive/Thankless little bitch/For the tears I cried.’

“‘My mother was a witch’ was a great opening line,” Tatler says. “His mum probably took offence, but she’s probably forgiven him now. I’m not sure what the whole thing’s about. It just kind of works as a rock song. I suppose you could say it’s about evil in man – good and bad; the yin and yang.”

Shortly after the completion of the song, the group tried it out on an audience. As Tatler recalls, it immediately passed the test: “As far as I remember, it always went down well. We soon learned that slow songs didn’t work live; the faster ones would stay in the set. Am I Evil must have gone down well, because we probably would have chucked it out otherwise.”

Tatler points out that Am I Evil appeared on two different Diamond Head studio albums: “We recorded it for the White Album [aka Lightning To The Nations]. We had to re-record it for the Living On… Borrowed Time album, and it felt a bit strange doing it again. But on the White Album, I do definitely remember listening back to it and – once I’d got the guitar solo right and all the keys that change underneath the guitar solo – it just blew me away.”

Tatler also recalls how he got his particular guitar sound on Am I Evil:

“There’s a slightly strange sound on the guitar which is a wah-wah – this Morley Power Wah Boost. It was set at a cutting, ‘nasal’ position. It gave it a little more of an ‘evil’ sound, I suppose.”

While the song instantly became a favourite among Diamond Head fans, Tatler remembers the day he was introduced to Metallica’s version of it:

“We were in the studio, and Sean had gotten a copy of [Metallica’s] Creeping Death, the 12-inch single, with Am I Evil on the B-side. We listened to it, and thought: ‘It’s heavier and tighter’, but we didn’t think it was any better than our version. Because, of course, we’re proud of our own recording.

“We had no idea that Metallica were going to become the biggest band in the world. At this stage, in 1984, they were on Music For Nations, and it didn’t look like they had the potential to conquer the world – to us. We knew Lars [Ulrich, drums], and we knew how ambitious he was, but I don’t think any of us had a clue that they were going to take that style of metal and bring it to the masses in the way they did. I’m thankful that they did, because I don’t know what I’d do without the songwriter’s royalties of those four [Diamond Head] songs they’ve covered [Am I Evil, Helpless, The Prince and It’s Electric]. Imitation is the sincerest form of flattery, so of course we’re flattered that they covered us. They could have covered Witchfinder General, couldn’t they? [laughs]”

Having split up in the mid-80s, Diamond Head reunited sporadically throughout the 90s, before Tatler soldiered on without Harris. To this day Am I Evil remains in the set-list.

“Every time we play it live, that riff seems to stir up something in the audience, and it’s always a winner,” Tatler says. “You just can’t fail if you fire into that riff. The crowd duly responds. It’s just got something about it. It’s fairly easy to play as well. It almost seems like, if you like rock, it’s one of the first riffs you learn. And I quite like that – it’s not some clever, complicated thing. It’s like a Smoke On The Water – a nice, simple, heavy riff that you can hum and remember.”

Perhaps unsurprisingly, Tatler agrees that Am I Evil is among Diamond Head’s best songs:

“I would say it’s one of the best, yes. It had all the ingredients – a good riff, a good chorus, it went fast, there’s a big guitar solo in it, it had good dynamics… Songs like that are hard to write. I don’t know how we did some of those songs. They don’t obey rules of songwriting; we did whatever we felt, rather than followed any rules like verse-bridge-chorus.

“There was a naivete in the early songs. Like I said, it always works. You never play that song and think: ‘That’s a bag of shit.’”

The 10 best NWOBHM songs according to Diamond Head's Brian Tatler