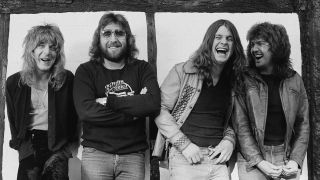 Summer ’79, and West Hollywood’s glitzy Le Parc Hotel has a nuisance guest. In the months since his ejection from Black Sabbath, Ozzy Osbourne has holed up in a suite he can scarcely afford, nursing “boxes of beer” and feeling “unhappy as fuck”.

Reports of the singer’s state are sketchy – his most regular visitor is his dealer – but the rumour is that he’s not long for the music industry, nor for this world. “I really did think: ‘This is the fucking end for me,’” he told Classic Rock in 2010. “I’d been booted out. I just got fucked up every day. Never went outside. Never even opened the drapes.”

There is some debate over the roots of the band that resurrected Ozzy. His own recollection is that “one morning, Sharon just came round and told me: ‘Get your shit together, I’ll manage you.’ Once she was in the picture, things got rolling.”

But bassist and co-writer Bob Daisley recalls the timeline differently, insisting Ozzy’s future wife “had fuck-all to do with it when it started”, and that he co-founded a line-up that was originally planned as an egalitarian band, not a star vehicle (“It wasn’t ‘the Ozzy Osbourne solo record’,” he told me. “That’s absolute bollocks”).

Neither side, however, denies the impact of Californian guitarist Randy Rhoads. At their first meeting, at the offices of Jet Records in late 1979, Daisley recalls the ex-Quiet Riot guitarist as a wisp of a man. “I walk in and see this young guy. His clothes were very fitted, his hair was perfect, his nails were manicured.”

Yet looks deceived. Rhoads brought a ferocious neo-classical guitar technique – and an irresistible riff that lit up the band’s first writing sessions. Unusually, the Crazy Train lick was not in the standard metal keys of ‘A’ or ‘E’, marking the first time a guitarist had written to order for Ozzy’s doomy holler.

“In Sabbath,” he noted, “they’d just write something and say, ‘Put a vocal on that’. Randy was the first guy to make it comfortable for me.”

Years later, questions would be raised over the authorship of the Crazy Train riff (“We were hanging out, and I showed Randy the riff to Steve Miller’s Swingtown,” said Quiet Riot’s Greg Leon. “I said: ‘Look what happens when you speed this riff up.’ We messed around, and the next thing I know he took it to a whole other level”).

Daisley, however, is adamant that “that signature riff in F-sharp-minor from Crazy Train was Randy’s, then I wrote the part for him to solo over, and Ozzy had the vocal melody. The title came because Randy had an effect that was making a psychedelic chugging sound through his amp. Randy and I were train buffs, and I said: ‘That sounds like a crazy train.’ Ozzy had this saying ‘You’re off the rails!’ so I used that in the lyrics.”

Beneath the verse’s piston-pump chug, however, the Crazy Train lyric tackled weightier themes than runaway locomotives. In echoes of Geezer Butler’s observations on Sabbath’s War Pigs, this new song carried an anti-conflict message, most notably in a final verse that referenced ‘Heirs of a cold war, that’s what we’ve become/ Inheriting troubles, I’m mentally numb’.

After fruitful rehearsals at Gloucestershire’s Clearwell Castle, recording for Ozzy’s Blizzard Of Ozz album began at Surrey’s Ridge Farm studios in March 1980. While Daisley was given the nickname ‘Sid Serious’ for his perfectionism, Ozzy’s behaviour was harder to call.

“He’d start out pretty straight and sober, probably take a bottle of scotch in there with him,” engineer Max Norman told KNAC. “He’d be nipping away at the scotch as we were doing a song… If he wanted to take a piss in the middle of the take, he’d do it right there on the floor.”

By contrast, when it came to tracking the formidable Crazy Train solo, Rhoads was sober and laser-focused, playing and recording three near-identical passes of the tapping and dive-bomb-packed passage.

“If you listen to Crazy Train real close,” Norman told Jas Obrecht, “you’ll hear there’s one main guitar around the centre, and two others playing exactly the same thing, panned to the left and right. What happens is you don’t hear them, you just hear it as one guitar. Randy was the best guy at overdubbing solos and tracking them that I’ve ever seen. I mean, he used to blow me away.”

Released as a single in 1980, Crazy Train was only a minor hit (peaking at No.49 in the UK). But the song was a highlight of the Blizzard Of Ozz tour which lifted Ozzy out of the doldrums, and its influence on the guitar scene was inestimable.

“I remember the moment I first heard Randy,” says Rage Against The Machine guitarist Tom Morello. “I was packed in the back of somebody’s mom’s hatchback in Libertyville, and Crazy Train came on. This blistering riff came at me, followed by an incredible solo, and of course there was Ozzy – I recognised his voice as the guy from Black Sabbath. By the end I was like: ‘What just happened?’ Randy was the greatest hard rock guitar player of all time.”

But not for long. Following the notorious plane crash in March 1982 that killed Rhoads and two others, the song became a bittersweet moment in the Osbourne catalogue. More recently, its emotional wrench was painfully evident on a 2016 episode of the father-and-son journey Ozzy And Jack’s World Detour, with Ozzy sat shell-shocked as he listens to a long-lost and unmixed master tape of the song that saved him.

“I remember the fun we had writing and making Crazy Train,” he says to the camera. “Listening to this, it’s like going back to a good time, but a really horrible time at the same time.”