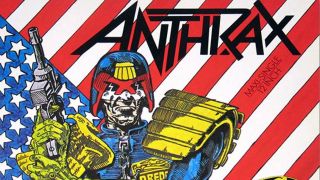 Metal’s strong bond with the world of comics has endured for decades now, but it’s hard to argue against the most significant crossover of all being Anthrax’s immortal I Am The Law. A thunderous tribute to UK comic 2000 AD’s most famous character, Judge Dredd, it provided guitarist Scott Ian with the perfect opportunity to indulge a newfound love. Scott discovered Dredd after visiting London’s Forbidden Planet store while on a promo trip for second album Spreading The Disease in early ’86.

“The artwork looked so amazing and Dredd was so fucking cool,” Scott recalls. “I picked up a few copies and every time I was in the UK I’d hit up more comic shops looking for it. It was impossible to find in the States. I went to Forbidden Planet in NYC and I said, ‘You guys don’t carry 2000 AD?’ and they said, ‘No, it’s really hard for us to import…’ Because of me badgering them, they ended up getting a couple of copies every month and holding them for me. I was paying five times the price for them and I’m pretty sure they were pocketing the money, but I just needed my Judge Dredd fix.”

Anthrax were in a strong position as they approached the making of their third album, Among The Living. A prominent force in the burgeoning thrash metal scene, their previous two albums had received widespread acclaim and much was expected of the next. Prior to hitting the studio, the band famously toured Europe as main support to Metallica, a tour during which Metallica bassist Cliff Burton tragically died. That experience was reflected in Scott’s lyrics for new epic A.D.I. (Horror Of It All), but the rest of the songs on Among The Living were firmly rooted in Scott’s many cultural passions.

“On that tour with Metallica, we already had the riffs for I Am The Law,” he remembers. “It sounded really anthemic, so what better to write about than this comic book character who just defined anthemic to me? It just worked. What did I know at the ripe old age of 22 or 23? I knew comics, horror and sci-fi, I knew skateboarding… I didn’t really have much life experience. I couldn’t really write about heartbreak or a horrible upbringing, because I didn’t have those. I was just writing about what I knew.”

Alongside Scott’s tribute to Judge Dredd, Among The Living boasted songs inspired by Stephen King’s novel The Stand (Among The Living), novella Apt Pupil (A Skeleton In The Closet) and the life and death of comedian John Belushi (Efilnikufesin (N.F.L.)), but it was I Am The Law that stood out as both the new record’s biggest anthem and its most obvious single. For Scott, the decision to release it in advance of the album made perfect sense, just as long as Anthrax could secure that artwork.

“Either the label or our merch company contacted whoever owned the rights to the Dredd artwork, because we had to have it,” he avows. “Surprisingly enough, they were amazingly open and cool about it. They didn’t ask for some large amount of money for the licensing and they were really excited and happy that we wanted to promote their character, especially in the US where Dredd was a relative unknown. Still to this day, whenever we want to do anything Dredd-related on a t-shirt, they’re always very cool about it.”

Released a few weeks before Among The Living hit the streets, I Am The Law defied the odds by breaching the UK Top 40 singles chart, peaking at Number 32. Anthrax’s already considerable UK fanbase could hardly have been more impressed, and within weeks of the album’s release, the New Yorkers were performing at the legendary Monsters Of Rock festival at Castle Donington and watching I Am The Law send the vast crowd into a state of mud-hurling insanity. More than three decades later, Scott Ian is still playing I Am The Law at every Anthrax show and he sees no reason to stop.

“I just think it’s a great song that still holds up,” he asserts. “I think that’s what’s great about any classic song. You just don’t get tired of them. That’s how I feel, as the guy who has to play it over and over again. There are many songs in our set that come and go but if we play I Am The Law at every show between now and the end of Anthrax, I wouldn’t have a problem with that. As soon as I bust into that riff, I can’t help but be happy.”