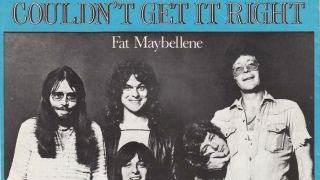 The 1970s were nuts, just completely bonkers; a decade where love and hate mashed into one big ball of war, peace, drugs, full-frontal nudity and acid-spitting guitars. A time and space that was loony.

Sifting through the detritus of those strange and often alarming times, you begin to see shining moments when everything came together perfectly. Climax Blues Band are responsible for one of those moments.

The band’s hit Couldn’t Get It Right, a song from their aptly-titled 1976 album Gold Plated, simply and elegantly summed up life in the mid-70s. The band had already been together nearly 10 years by then, had progressed from a scruffy straight blues outfit from the streets of Stafford to a globe-trotting, multi-faceted modern rock band. With Gold Plated they had hit their stride, and the album fairly throbbed with downtown cool.

While Gold Plated contained many rewards, it was Couldn’t Get It Right that truly rose to the occasion. It was a warm, evergreen slice of pure pop genius full of funky bass, cowbell, and lyrics that dripped with wide-collared cool: ‘Time was drifting, this rock had got to roll/So I hit the road and made my getaway…’ The song reached No.10 in the UK in October ’76 and later No.3 in the US.

It all started in the West Midlands town of Stafford, circa 1967. Singer/songwriter Colin Cooper had just finished his tenure with The Hipster Image, a sax-driven garage-pop band. Looking to get back to his first love, the blues, Cooper got together with some fresh-faced local talent and named his new outfit the Climax Chicago Blues Band. At their inception they were a straight-ahead blues band. By the time they returned to the studio later that year for their follow-up, Plays On, their signature sound – an R&B-tinged, blues-rock hybrid – began to emerge.

Things picked up quickly for the band from there. After a minor squabble with US band The Chicago Transit Authority (later just plain old Chicago), they shortened their name to the Climax Blues Band and released a slew of seminal albums, including A Lot of Bottle (1970) and Tightly Knit (1971).

Despite their headway, the early 1970s were still a struggle for Climax. They got by the hard way: gigging endlessly. And then came Couldn’t Get It Right.

“The original draft composition was mine,” guitarist/vocalist Peter Haycock says of their breakthrough song. “The band then worked on the arrangement for an afternoon at [drummer] John Cuffley’s place in Milwich, Staffs. Later, Colin honed and added to my lyrics to suit his own deep vocal style during the recording period, including evenings in the hotel in London after the sessions, when we would sit together and work on the lyrics. A good example would be the transition from my original ‘We all went looking for a sign in the middle of the night’ to ‘I kept on looking…’ My original chorus lyric idea was simply about driving around some city in the USA trying to find the Holiday Inn, which despite its brightly illuminated sign became increasingly hard to reach due to one-way systems, etcetera.

“Couldn’t Get it Right was a hit in England, we were on Top Of The Pops, all that. About a year later it went to number three in the States. From 1975 to ’76 was our best year. But a long one.”

The gigs got bigger, and so did their earnings. And with them a slew of new challenges, opportunities and inevitable dysfunctions. “It was a long year with many rewards,” Haycock recalls. “A couple of us had developed expensive hobbies involving white powder and noses. As for myself, I was pretty busy writing songs.”

Climax kept things rolling, but that all-important follow-up hit eluded them until 1980, when one of guitarist Derek Holt’s songs, I Love You, took them back into the spotlight. A syrupy, AOR ballad, it became both a blessing and curse for Climax. While it boosted their status, especially in the US, it would ultimately break them apart.

“It was purely the producer’s idea,” Haycock says in no uncertain terms. “I hated most of it. Unfortunately the producer was nominated mainly by the record company, and turned out to be an idiot. I ended up writing bland pop crap, too, thanks to him.”

Disillusioned, Haycock left the band soon after. Climax carried on, operating first as a modern rock band, and then, in the past two decades, returning to Colin Cooper’s first love, the blues. Peter Haycock’s post-Climax career has included a successful run with ELO Part Two. While he still stays in touch with most of the original Climax band members, he says it’s strictly business.

In the past decade Climax Blues Band settled into a comfortable groove playing blues festivals. But things took a turn for the tragic in 2006, when founder Colin Cooper was diagnosed with cancer. He continued to play with the band until his death in July 2008.

For the first time in their 40-year history, the Climax Blues Band were without their singer. Furthermore, the band no longer included any original members. It was time the survivors did some soul-searching. “We knew it wouldn’t be the same without Colin,” says bass player Neil Simpson, who joined the band in 1991, “but we’d already made our minds up that we would carry on, one way or another, after Colin had gone. It seems horribly callous, but Colin himself made it pretty obvious that he wanted us to continue.”

The rest of the band rallied, and for the first time in many years plan on entering the recording studio to lay down new songs. And so they carry on, still trying to get it right, again, 40 years on.

After Climax, guitarist/vocalist Pete Haycock had a stint in the newly formed Electric Light Orchestra Part Two.After ELO effectively disbanded in 1986, in 1989 drummer Bev Bevan (who co-owned the ELO name) put together a new version that, due to legal reasons had to add the ‘Part Two’ to the name.

The new band, which included long-time ELO man Louis Clark and former Climax Blueser Haycock, released a self-titled album in 1991, and their touring included performing with the Moscow Symphony Orchestra.

Since leaving ELO Part 2 in 1993 Haycock collaborated with Hans Zimmer on a number of Hollywood film scores, and gigged with his band, Pete Haycock’s True Blues. He died in October 2013 of a heart-attack.