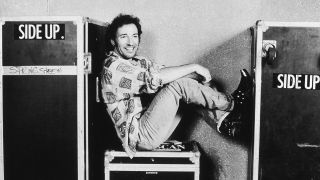 Tom Joad, the hero of John Steinbeck’s classic 1939 American novel The Grapes Of Wrath, has had a pretty good life as an apparition, thanks to Bruce Springsteen and some of his friends.

Inspired by the book and John Ford’s 1940 film adaptation, as well as by Woody Guthrie’s The Ballad Of Tom Joad, Springsteen wrote The Ghost Of Tom Joad, a modern-day appropriation of the same Great Depression-era concerns, during the early 90s. It became the title track for his stripped-down 1995 acoustic album, and a staple – usually the opening number – for the live shows that supported it. The song was also rocked up, dramatically, two years later by Rage Against the Machine, and this year Springsteen – with Rage guitarist Tom Morello in tow as part of his E Street Band – released yet another version for his latest album, High Hopes.

“I want to make a record where I don’t have to play by the rules… have any hit singles or none of that stuff,” Springsteen said of the Tom Joad album, backstage at an early stop on his solo acoustic tour to support it. “I can make whatever kind of music I want to make. I hadn’t done that in a real long time. I guess I wanted to see if I could do it again.”

Tom Joad was actually the latest in a series of curve balls Springsteen had thrown his audience since Born In The USA. There was the calculated come-down of Tunnel Of Love and the shocking subsequent dismissal of the E Street Band. The group’s reunion for the early 1996 Greatest Hits album was just as surprising, and The Ghost Of Tom Joad was one of the songs he worked on with the band at that time. “It started out as a rock song. But It didn’t feel right, so I set it aside,” Springsteen wrote in 1998 lyric book Songs.

He returned to the Los Angeles area, where he was living at the time, and began work on starker material, “just myself and my guitar”, and the new version of Tom Joad became a linchpin for his next project, a kind of musical sibling to ’82’s Nebraska.

“Once I cut Tom Joad, I had a feeling for the record I wanted to make,” Springsteen said. “It was an acoustic album where I picked up elements of the themes I had worked on in the past and set the stories in the mid-90s.”

That was certainly true of the set’s title track, which chronicled the other side of the Clinton era’s prosperity, using subtle and minimalist instrumentation and a mournful melody to deliver timeless images – ‘Families sleepin’ in their cars in the Southwest / No home, no job, no peace no rest’ – of ordinary Joes, along with migrants and a criminal or two, grasping desperately for an American Dream made elusive by class schisms and corporate greed.

But Springsteen rejected any notions of despair. “There’s always something being revealed – about them, about you. That’s always exciting,” he explained. “Even if the stuff is dark, even if there’s tragedy involved, it’s still exciting. The truth is always hopeful. It’s always inspiring, no matter what it is.”

It wasn’t an easy sell, however; Tom Joad was the first Springsteen album since 1973 to miss the top five, although it did win a Grammy for Best Contemporary Folk Album. “I knew [the album] wouldn’t attract my largest audience,” Springsteen wrote in Songs. “But I was sure the songs on it added up to a reaffirmation of the best of what I do.”

Rage Against The Machine certainly heard the truth of Tom Joad and found in it a firm fit with the group’s own populist, leftist leaning. “I was a huge fan of The Ghost Of Tom Joad,” Morello recalls. “It was my favourite record for a long time. I think I gave the CD to Zack [De La Rocha, Rage’s frontman] for Christmas that year. We were about to set off with U2 on the PopMart tour, and we didn’t have any new material. I suggested that we do a Rage-ified cover of The Ghost Of Tom Joad. I think at first that suggestion was met with some scepticism, but then it came together and sounded great on the tour. The lyrics were certainly not out of context for Rage Against The Machine. And I brought a bulldozer riff or two to it that worked very well.”

It sounded so good that, during the tour, Rage ducked into the studio to record a version of Tom Joad for a CD single accompanying the group’s self-titled 1997 home video. Rage later re-cut it for a version that appeared on their 2001 covers set, Renegades, and later on the No Boundaries: A Benefit For The Kosovar Refugees benefit album. It became Rage’s second-highest charting song.

Morello first performed Tom Joad with Springsteen and the E Street Band in April 2008 in Anaheim, California, when Springsteen surprised the guitarist by asking him to sing some lead vocals as well as play on it. “That was the first time I ever sang with an electric guitar in my hands,” notes Morello.

Springsteen & co had already turned Tom Joad into a powerhouse electric showstopper inspired by the Rage version; when Morello stood in for Steve Van Zandt for Bruce and his band’s 2008 tour of Australia, it was a regular part of the set. It was also a logical inclusion for High Hopes when Springsteen decided to make Morello an integral part of the album.

“[Tom Joad] was the one I felt I really had to hit the nail on the head with,” Morello says. “It’s been such an exciting live moment and a great melding of the two worlds of the E Street Band and my playing on it. I was hopeful that we were going to be able to capture the spark of those live performances and I think, in my humble view, we may have surpassed it. It’s a really great recording of that song.”