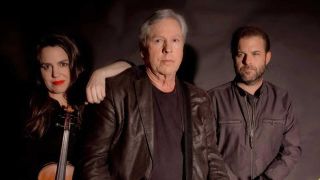 James Williamson & The Pink Hearts - Behind The Shade

James Williamson's riffs aren't like anyone else's. As guitarist with Iggy And The Stooges, his work on the 1973 classic Raw Power made that album as much his as it was was Iggy's. They were frantic, careering riffs, embellished with solos that screeched and burned and soared with a rare, overdriven ferocity. If any guitarist could match his playing to Iggy's "streetwalkin' cheetah with a heart full of napalm" lyric, it was Williamson.

Cut to 2018. Williamson is 68. And Behind The Shade, the new album by James Williamson & The Pink Hearts, suggests that those fingers are still burning. First single Riot On The Strip sounds likes it was beamed in from 1973, with guitar that shreds and twists and sounds every bit as incendiary as it did back then. Even Williamson agrees. "It literally couldn’t be anyone else," he says.

"I simply write and play guitar riffs the way I hear and feel them," he continues. "My style is all my own; it was developed in isolation as an emotional outlet for teenage angst back in the day. So in that sense, it's impossible to duplicate as it all comes down to my fingers and my head. My style is certainly identifiable!"

"Riot On The Strip is one of the rabble rousing songs on the album that’s kind of an anthem to disgust, disaffection and dissatisfaction," says Williamson. "It rocks hard and feels good."

Joining Williamson in the Pink Hearts are are two singers: Frank Meyer from the appropriately-named Los Angeles punks Steetwalkin’ Cheetahs, and Petra Haden, formerly of 90s alt.rockers That Dog.

"I first met Frank in 2015 while looking for substitute singers for a live show of my solo album Re-Licked," says Williamson. "Cheetah Chrome [former Dead Boys guitarist] suggested him. I asked Frank to do Sick of You” and was impressed with both his singing and his stage presence. As quickly as I could turn out riffs and tunes, he would turn them around with fully developed lyrics. It was kind of amazing, really!”

"I’ve been aware of Petra’s work since around 2013 when I first met her while looking for a backing singer for the final Stooges album Ready to Die. Mike Watt [Minutemen/Firehose/Stooges bassist] suggested that I listen to her a cappella album Petra Haden Sings: The Who Sells Out. I was knocked out.

"I met with her and became more impressed as time went on. She delivered some amazing vocals on Ready to Die. From there, I did a single with her on lead vocals for a charity record to raise funds for animal rescue, and I utilised her again to great effect on the Acoustic K.O. EP I did last year with Deniz Tek. In addition to having an amazing voice, she's an incredible violin player."

Behind The Shade was recorded last year in Berkeley and Los Angeles, and is released on June 22. It'll be followed by two shows, at the El Rey Theatre in Los Angeles on June 29, and the Great American Music Hall in San Francisco the following night.

Completing the band onstage will be Smash Mouth drummer Michael Urbano, Jason Carmer on bass, and Cat Power musical director Gregg Foreman on keyboards, who all played in the Behind The Shade..

"This is easily the most musically diverse album I've ever done," says Williamson, undoubtedly proud of what he's done. "It's going to surprise people."

And what about another Stooges reunion?

"Neither Iggy nor I are likely to have any future interest in working together," says Williamson. "We did that that off and on during the Stooges' 10-year victory lap. However, I wouldn’t have predicted the 2009 reunion either, so who knows?"

Behind The Shade is released on June 22.