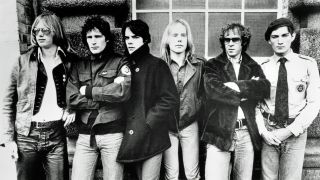 Formed in the mid-1970s by Detroit-born guitarist Deniz Tek and singer Rob Younger, Australia’s legendary Radio Birdman now stand tall among that country’s immortal rock‘n’roll trailblazers. Now reformed with five of the six original members and in the middle of a scorching European tour — they’ll play The Dome in London on Sunday — Radio Birdman are back to claim the place in high-energy rock history so beautifully consolidated by 2014’s definitive, self-titled box set, which corralled all the singles and albums they recorded before dissolving in the early 80s, including 1977’s classic Radios Appear.

Speaking from the band’s tour bus, Deniz Tek lists his ten all-time favourite Australian rock bands, while pointing out, “I am listing only my own personal favourites, without regard to commercial success, records sold, or general cultural impact. As in any list of this type, some bands are left out not because of lack of merit or lack of my own afﬁnity to their music, but due only to limitations of space. I also chose to limit my responses to actual ‘bands’ and not solo artists, which explains the omission of greats such as Johnny O’Keefe, Phil Jones, Louis Tillett, Charlie Owen, Penny Ikinger, etc. etc.

Far and away ahead of the pack, due to sheer volume and consistency of great songwriting by Harry Vanda and George Young, Stevie Wright’s vocal delivery, their high impact performances, and the amazing string of hook-ﬁlled hit singles (notably Friday on My Mind). For creativity and originality, as well as total cool factor, the Easybeats are unrivalled in Australian rock history.

The snarl of Jim Keay’s vocals and the songwriting of Mick Bower rules! Nasty garage beat on Undecided blended seamlessly with the raga-driven psychedelia of Buried and Dead, on into the Vietnam lament of Wars Or Hands Of Time and blossoming into beautiful late 60s psych-pop a la Hollies on Elevator Driver and Living In A Childs Dream.

Nothing else sounded like them. Gerry Humphry’s insane, powerhouse vocals and the raw, ripping guitar riffs of Rob Lovett propelled highly original and emotionally evocative tunes, like The Loved One and Sad Dark Eyes.

Surf beat on a par with the early Ventures and Shadows. Superb instrumental tracks include War Of The Worlds and Bombora. They maintained their level of greatness with added vocals as well, with the deﬁnitive Come On.

This band evolved from the Psycho Surgeons in late 70s Sydney. Mark Taylor had already developed a weird original style, playing his guitar upside down and backwards. Adding Peter Tillman to the lineup gave them further new dimensions in both musical and lyrical content, producing Tillman/Taylor songs such as Hindu Gods Of Love, Bully, Sockman and more, plus an amazing cover of the 13th Floor Elevators’ Levitation. Such was the sheer intensity of Tillman’s performance that one night in 1979, when they opened for my band The Visitors, I became worried that he might actually die onstage.

Only around for a short time between 1978 and 1979, The Passengers had a bundle of heartbreakingly beautiful pop tunes featuring vocalist and lyricist Angie Pepper, whom Atlantic Records producer Arif Mardin once praised as having “a most special voice”. Indeed she did. They only released one vinyl single while the band still existed - Face With No Name backed with Girlfriend’s Boyfriend. Fortunately, an album’s worth of studio material later surfaced under the name It’s Just That I Miss You.

The Seekers, with Judith Durham on vocals, were a folk-pop band who may have had the ﬁrst large scale American and European success of any Australian band, with the hits Georgie Girl and Another You. Their less well known song The Carnival Is Over caused an entire generation of 12 year old girls to burst into tears simultaneously all across Australia. I am not sure if they were square in a great way, or great in a square way, but their combination of beautifully crafted pop tunes and catchy acoustic 12-string riffs still sounds great on my record player today.

Another band that started off doing beautiful, cinematic instrumentals and soundscapes. They added a singer called Tex Perkins later, taking their music into a hard edged western rock‘n’roll area in the realm of T-Bone Burnett. They made a great album called This Is Not The Way Home.

Singer-guitarist Ed Kuepper’s post-Saints outﬁt, The Laughing Clowns, were the perfect medium for his songcraft and presentation. I still recall the ﬁrst time I heard the classic Eternally Yours and thinking ‘Wow! And if Ed can do it, I can do it’. That’s inspiration!

I only heard one song of theirs on the radio a couple of weeks ago, and it was fab! They reminded me of American Spring. I can’t even tell you the name of the tune, but it caught my attention above and beyond everything else that was presented on a “new releases” program on Triple-J Radio during a late night drive in the rain in Victoria. They are new, young, from Sydney and I am keen to hear more from them.

These are a few of the other great bands that I would have liked to mention, but didn’t quite make the cut (Although if you asked me tomorrow my A- list would be different):

The Sunny Boys
Died Pretty
The Aspersion Caste
The Twilights
The Powder Monkeys
The Church
The Saints
The Bee Gees
The Zoot, Purple Hearts and Missing Links were all great high energy bands in the sixties that were not very original, but faithfully rendered The Beat.