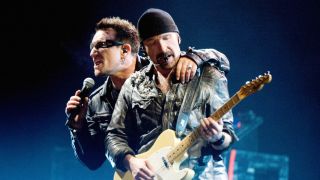 Forged from the ruins of punk, they were now fashioning a more declarative brand of music whose chief weapons were big guitars and soaring vocals. And, particularly when it came to The Alarm, ridiculous hair. This growing style (that’s the music, not the hair) was haughtily described by The Waterboys’ Mike Scott as “a metaphor for seeing God’s signature in the world.”/o:p

Scott’s songs certainly came loaded with spiritual ruminations. As did those of U2 and The Alarm, who both salted their lyrics with Christian symbolism. But most of all this was earnest, passionate rock that aimed to turn live shows into a vast communal experience. Alarm anthems like Blaze Of Glory and Sixty Eight Guns were unabashed songs for the people, rolling in on waves of good time camaraderie./o:p

Similarly, the piping bombast of Fields Of Fire and In A Big Country helped sell millions for Stuart Adamson’s Big Country, whose crunching Caledonian rock was readymade for vast stages. As were Simple Minds, who embraced a new sense of ‘80s grandeur with cloud-bashing tunes like Alive And Kicking and Sanctify Yourself./o:p

U2, meanwhile, were fast becoming the biggest draw on the planet. Love or loathe them (and there were very few who fell in between), their wincingly sincere rock took on a messianic sense of devotion with 1987’s crowning glory, The Joshua Tree.

Of course, all that righteous breast-beating had to tire itself out at some point. And by the following decade The Big Music had become a totem of all that was embarrassing about ‘80s culture: pretentious pop, daft mullets and the sense that rock had allowed itself to become just another bland corporate commodity.

But now a new generation is tapping into that same ‘80s ethic, both stylistically and emotionally. Perhaps the most significant example of late is The Horrors, whose breakthrough album Skying (2011) was full of sweeping guitars and panoramic vistas. It was an assured leap for Southend’s onetime goth-rockers, who seemed to recast themselves as fresh-cheeked children of Simple Minds. Incidentally, as avowed Minds fan James Dean Bradfield has pointed out, the new Manic Street Preachers album, Futurology, is also partly indebted to Jim Kerr and co./o:p

The return of the ‘80s formula isn’t consigned to homegrown bands. The self-titled second album from Seattle’s Augustines is fit to bursting with big anthems and fat hooks. It’s an inclusive way for singer-guitarist Billy McCarthy to transform personal tales of struggle and woe into something universal. Now You Are Free and Cruel City, the latter with an irresistible chanted refrain, are already hot favourites with the band’s increasing legion of fans.

Further south, LA’s Golden State are also attracting lovers of ‘80s heartland rock with their earnest attempt to tackle global issues through their art. Singer James Grundler, a huge fan of U2 and with “a lifelong obsession with aspirational music”, sounds uncannily Bono-like as he stares down the apocalypse on Standing On The Edge Of It All and World On Fire. His ever-so-serious lyrics – “And when the fire burns out / And there’s me and you / We’re getting closer now / Closer than you’d believe / But the truth is still out of reach” – approximate a similar sense of woolly defiance./o:p

Back home, West Country quintet Pylo have set about fulfilling their mission statement - “to create something of vast proportion yet of subtle nuance” – with a couple of recent releases. This year’s EP, The Woman, finds vocalist Matt Aldus declaring : “I wanna walk upon the water / I wanna be saved,” on the widescreen drama of Young.

Others reaching for salvation in the stars include Kilto Take, who grew up listening to U2, Radiohead, The Cure and Simple Minds, to name a few. The power-trio’s sound, as evinced on debut Resolute, is cut accordingly. Welsh outfit The People The Poet build bridges of emotion on first album The Narrator, the result of an invitation to fans to share their personal experiences – both good, bad and tragic – as subject matter. And Black Country four-piece Isolated Atoms, already described by one US rock mag as “the next British invasion”, rush headlong into ‘80s-style pomp through the likes of Play and Perception.

While Coldplay are proof of the public’s enduring appetite for arms-aloft stadium rock, for better or worse, quite what this latest breed of bands signifies isn’t exactly clear. Maybe they’re a product of recession and austerity, escapist music for escapist times. The message seems to be that we’re all in this together, so why not join hands and celebrate the simple act of mass communion./o:p

On a more prosaic level, most of these groups won’t even remember the ‘80s. So instead it could just be the simple turn of rock’s evolutionary wheel, its cyclic nature having already revisited the splashy New Romantic era. Next stop: blustery arena rock./o:p

Whatever, The Big Music is back. Though thankfully without the crap hair.