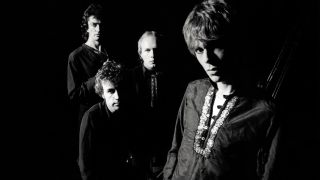 Some bands will forever be associated with, and even trapped by, one single defining song. In the case of South London’s The Only Ones, it’s their star-surfing drug anthem Another Girl Another Planet which the All Music Guide called “the greatest rock single ever recorded”.

This timelessly magical one-off, where everything sits right and liftoff guaranteed after those first distinctive, stuttering chords, was the tip of a musical iceberg which went against the grain in the punk-dominated late 70s. The band were older and heavily influenced by psychedelia, from John Perry’s Hendrix-influenced guitar to Perrett’s doomed Syd Barrett twang. Demoing his songs of love, hate and drugs since 1972, Perrett formed the group in August 1976 after being introduced to Perry, lineup completed by former Spooky Tooth drummer Mike Kellie and bassist Alan Mair from 60s Scottish giants the Beatstalkers. Their first single, Lovers Of Today, was released on the independent Vengeance label, stoking enough buzz to gain a deal with CBS. Another Girl Another Planet was their maiden voyage with the label, elevating their standing with critics and those looking for deeper musical content but not translating into sales (Although they gained a fan in kindred spirit Johnny Thunders, whose immortal You Can’t Put Your Arms Around A Memory was blessed with Perrett’s backing vocals, while Kellie played drums at his 1978 Lyceum show). The Only Ones’ eponymous first album was released in 1978, followed the next year by Even Serpents Shine, then 1980’s Baby’s Got A Gun. While punk was driven by amphetamines, The Only Ones were imbued with the growing heroin presence which infused their songs with narcotic allure which inevitably started palling once the drug’s more numbing effects started kicking in. It was once stated that Perry’s sound dramatically changed after he hollowed out his guitar to smuggle drugs through customs while on tour. Critical acclaim and fans like David Bowie showing up at their Rainbow Theatre headliner didn’t sell the records and the Only Ones imploded in 1982, leaving a band out of time still waiting for their moment to come. Also inevitably, their influence and cult status became increasingly astronomical with subsequent generations and bands, including the Libertines and Nirvana. Perrett returned in 1996, his Woke Up Sticky album showing his songwriting still an undimmed rewarding source for those prepared to dig beneath current fads, while Perry played sessions for the likes of Evan Dando and Marianne Faithfull, also writing several well received rock biographies. After the Vodafone resuscitation, the band continued gigging through 2008 and 2009, recording new songs such as Black Operations and Magic Tablet (still yet to be released). Their last appearance was at 2012’s Rebellion Festival in Blackpool. One-song wonders? Try these for size. Tellingly, their albums have never been deleted.

It has to be here and sounds no less gloriously euphoric.

Audaciously running to nearly six minutes of guitar pyrotechnics, this sombre but compelling trawl displays two of Perrett’s main lyrical fixations - Aleister Crowley and heroin - while showing Perry as one of the UK’s most underrated axemen.

From Here To Eternity (Even Serpents Shine, CBS 1979)

Practically every track on the band’s second album is a classic, imbued with the opiated doom which marked The Only Ones’ best work.

One of the all-time greatest rock ‘n’ roll love songs, gorgeously enhanced by the haunting harmony vocals of Koulla Kakoulli. When being in love wasn’t considered cool, Perrett proudly declared himself an incurable romantic (although the song was reputedly about his runaway cat!).

After the ongoing lack of sales, CBS brought in hotshot producer Colin Thurston (Duran Duran, Bow Wow Wow, Kajagoogoo) but the drugs were eroding the group’s songwriting bite and their instrumental supernovas seemed dulled. The album still contained its share of gems, such as this world weary classic.

Perrett returned in the mid-90s with an overlooked classic up there with his best. The track is actually written from the perspective of a junkie waking up in the morgue.

Peter Perrett is interviewed in Classic Rock 199, available as digital or print editions from MyFavouriteMagazines.