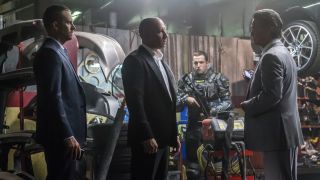 If you’re at any odds as to whether you should watch the latest Fast & Furious film, then you’re clearly not the target market. If you are, then the mere mention of a new Fast & Furious film should fill you with such a surge of giddy excitement, that it’s very possible that urine may be expelled from your body. We’re obviously in that latter half, because we really like explosions and fire and people punching each other in the face. For this reason, we went to see Fast & Furious 7 the other day.

Here are the most metal things about it:

**Tony Jaa is in it **Remember Tony Jaa? From Ong Bak? The one who went and hid in a cave for a couple of months? Well, he’s back in films again now, and if you remember how GOT DAYM awesome Ong Bak was, that should make you very happy indeed. And in this he plays a bad guy, so he’s even more badass. Also he has loads of really bad tribal tattoos, so he looks a bit like he was in an early noughties nu-metal band (although that’s not necessarily a good thing).

**The Rock FLEXES OFF an arm cast **We refuse to call him anything other than The Rock, so that’s what we’re sticking with. In Furious 7, he is put in hospital (which ruined our illusion of The Rock being utterly unstoppable, somewhat) and his entire arm is put in a cast. However, casts are of no use to The Rock, so he decides to take it off, by flexing his muscles until it explodes. Obviously. If you’ve ever seen a more metal thing than that, then you’re probably, erm, Rob Barrett’s flatmate or something.

Jason Statham can survive ANYTHING You know when you’re right next to a giant explosion and you definitely don’t survive it because it’s an explosion and you’re right next to it? You know when you crash your car down a mountain and you die because you’ve just crashed your car down a mountain? Yeah, well Jason Statham doesn’t know these things, because they don’t affect him. He is the world’s most resilient human being. Fire-proof, bomb-proof, car-proof, everything-proof. He’s the hardest man alive. Apart from maybe Vin Diesel, but still.

He can also KILL anything The first scene of the movie has Statham looking out a window in a hospital, talking bollocks (he literally says “bollocks”), before the camera pans out and it turns out he’s MURDERED AN ENTIRE HOSPITAL on his own. Please also bear in mind that the hospital was also full of armed police. He’s killed them too. This is never explained btw. Hopefully it never will be. To explain would be to ruin.

**The crew go skydiving. IN THEIR CARS **A pretty metal thing to do is to go skydiving, right? The main reason for this is that almost everyone that does it throws up the devil horns on the way down, even if they don’t like metal. But we’ll let them off, they are hurtling towards the ground at 120mph, after all. In Furious 7, they also do some skydiving, only they do it in their actual cars. This obviously makes absolutely no sense whatsoever, but then nor do Neurosis’ lyrics, and we don’t hear you complaining about that.

**There’s a fight at the end where Jason Statham and Vin Diesel beat the shit out of each other with metal poles **Let’s go literal one last time, but also with a tad of the metaphorical about it. Here we’ve got actual giant metal poles, but also two men of the hardest order, using them to beat the shit out of each other. Normally one hit to the head with a giant metal pole means the end of the fight, but in this case, it doesn’t, because it goes on for ages. It’s stupid and brilliant and hilarious and metal.

**It will make you cry **It’s metal to cry right? Wait, it’s not? Oh okay, we definitely didn’t cry at the end then. Bye!