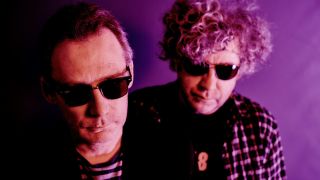 Since exploding into rock’s consciousness in a riotous squall of feedback in 1984, The Jesus And Mary Chain’s combination of Brill Building sugar and black-leather spite saw them dominate the indie milieu for more than a decade. Having re-formed in 2007 after splitting in ’98, brothers Jim and William Reid (vocals and guitar respectively) re-employed old pal Alan McGee as their manager, toured Psychocandy, and later this month release the Youth-produced Damage And Joy, their first album in 19 years. Singer Jim Reid talks to CR about negative energy, hearing damage and sibling wars.

How did you come to work with Youth?

We wanted to work with a producer – we’d never used one before – and McGee’s big pals with Youth. So we met up and it seemed like it’d work. We were worried that going into the studio would be like World War III again. We thought: get a producer and he can referee. When the bottles start flying he can say: “Simmer down, lads.” As it turned out it didn’t get like that.

The song Facing Up To The Facts includes the lyric: ‘I hate my brother and he hates me, that’s the way it’s supposed to be.’ Really?

It’s what makes the band tick. There’s a lot of love, but a lot of bad vibes. Over more than thirty years we’ve been together, that negative energy has fuelled the band. My brother and I rubbing up against each other creates sparks, and the hate is every bit as important and valid as the love.

It worked for The Kinks.

Had me and William not been in a band together it could have been totally different. But we’ve been doing this since our early twenties. It causes friction and animosity and we fight. The stakes seem higher when you’re fighting over the last bit of oxygen in this trapped elevator called ‘your band’. It can get quite brutal. If he’d become a bank manager and I a chartered accountant, I guess we’d meet up at Christmas and be helluva polite, but that’s not the way we went.

The Mary Chain have never shied away from high volume when playing live. How’s your hearing?

Not great. I’ve damaged my hearing from doing this for so many years. I’ve hearing loss and tinnitus. Particularly on my left side, my left ear – the one that faces William’s amp, strangely enough.

Fractured romance lies at the core of Mary Chain records. Are you an old softie at heart?

We’re a couple of softies. We never claimed to be anything else. There’s always a twist with Mary Chain love songs. It’s never quite as simple as ‘boy meets girl, lives happily ever after’. That would be way too easy.

Were you never approached to have anything included on either of the Trainspotting soundtracks?

Never was, would love to have been. Big fan of Irvine [Welsh, author], but not sure Irvine’s such a big fan of us.

How integral was your manager Alan McGee to actually getting the band back in the studio again?

We would have made a record anyway, but he did kick us up the arse a bit. It was time. We’d been talking about it for so long we’d got to the point where we’d have to either make the damn record or shut up talking about it.

Damage And Joy is released on March 24 via ADA/Warner Music.

The Jesus And Mary Chain: Live At Barrowlands