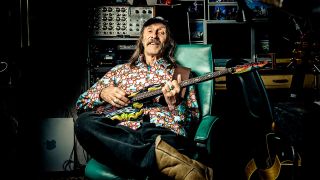 A co-founder of Hawkwind in 1969 and the only constant member throughout the band’s long and colourful history, singer, songwriter and multi-instrumentalist Dave Brock is a humanitarian who has dedicated his life to creating space-rock, and across 40 years has played on many acclaimed albums. This is how he thinks in 2017…

Meat is murder, but there are solutions

People should buy a fascinating book called Comfortably Unaware by Dr Richard Oppenlander, which explains so many things that are wrong with this world. If even half of us stopped eating meat there’d be more land for vegetables, and water could be used for different purposes. Comfortably Unaware tells the truth about the rain forest being cut down for meat production. We are being brainwashed into drinking dairy milk, but you can buy soya alternatives, and there are vegetarian options for bacon, sausages, fish fingers, almost anything. They’re indistinguishable from the real thing.

Over-fishing, over-eating and over-everything are just the way of this world. I deplore its disposability.

I have just spent some time in Cambodia, a really hot country, where there were very few solar panels. It made me wonder why. Some forethought would work wonders, and with a few simple changes starvation could be eradicated, but the planet is run by the big oil production and meat-producing companies.

Cannabis should be legalised

I can see both sides of the argument. I believe people should be able to grow and use their own marijuana, certainly. Years ago you could get wonderful, flavoursome marijuana, there were all sorts of amazing variations and textures. But I must admit the hybrids are very dangerous. A lot of today’s marijuana is very strong indeed. I don’t really like it that way because the extra edge almost defeats the point of taking it. I’m all for legalisation, but you’ve got to use control. Education breeds responsibility.

To some, cannabis is a ‘gateway’ drug to harder substances like cocaine and heroin. I can see why they’d reach that conclusion, but I disagree. If you’ve got an addictive personality, anything’s a gateway.

There is no God

I can see the principles behind religion – to differentiate between right and wrong and to prevent bad deeds – and of course there’s logic to that, but I’m an atheist. I’ve read a lot about different religions and wars, and with so many other universes and galaxies out there there cannot be one great God that made them all.

Brexit and Trump – shouldn’t we give them a chance?

Although it’s scary, change can also be a good thing. Hawkwind made an album called It Is The Business Of The Future To Be Dangerous [in 1993]. In fifty years, people will look back and ask: “Fucking hell, whatever were they doing voting in Trump?” And who really knows what he’s going to do? But change can also be a positive.

It’s the same with Brexit. So many rights were taken away from us when we entered the Common Market, later the EU. When you think of market traders being fined for selling in pounds and ounces for pensioners who didn’t understand grams, it’s ridiculous that that bloke ended up with a criminal record. We were not even running our own country, the EU was telling us what to do. The EU appeared more worried about those issues than a seven-year war between Serbia and Bosnia that could have been halted in the first few months.

I was right about technology. Sadly

During the sixties and seventies, Hawkwind sang about how in the future you would be spotted wherever you go. And thanks to your mobile phone those predictions came true. As a fan of Star Trek, I’m surprised it took so long. Personally I’m not too interested in mobile phones. I’ve got one that I use to send texts, but that’s about it. I hate seeing people walking around with them glued to their ears, but that’s the world we live in. They get run over because they’re oblivious to what’s going on around them.

If Hawkwind’s music is so easy to make, why aren’t we copied more?

It really isn’t as simple as some have claimed. During the 1960s we got slagged off for being three-chord wonders, and I always found that unfair. These days we rehearse a lot.

I always find it quite strange when we play at some of these heavy metal festivals and a black metal band on the bill will come over to shake my hand and say: “Without Hawkwind we wouldn’t be here.” That leaves me scratching my head. I mean, I copied Big Bill Broonzy [blues singer/guitarist who died in 1958]. I just can’t see the connection.

Don’t say anything you wouldn’t repeat to my face

Nowadays everybody has an opinion, and the internet provides them with a platform. Five years ago we wrote a song called Computer Cowards [on Onward] about that power. In extreme cases, online abuse can lead to suicides. Matthew [Wright, TV presenter and friend of Hawkwind] gets it; sportsmen are told they’re washed up after losing a game. It’s all too personal. I got called a c**t for going on the radio and talking about my guests, alive or dead, for a fictional dinner party. I won’t rake it all up again, but for fuck’s sake, some of the abuse I received was shocking. Those I had picked were learned individuals – I wanted a debate. Have these haters got no brains?

The life of Mr Dibs [who joined Hawkwind 2007] was made a misery by [his predecessor] Alan Davey, who asked all of his mates to slag him off. I was so angry I called up some of those idiots or even went up to them at our gigs: “Hi. My name’s Dave Brock. Have you got something to say to me?” They quaked with fear and backed down very quickly.

Delegating responsibility to my bandmates is fine, and I really don’t mind standing around at the side or the back of the stage, but it’s still great to pop up and score the occasional goal. New blood is vital to any band. Our new bass player Haz Wheaton is in a different world to Niall [Hone, who also plays bass] and Dibs [who now focuses on lead vocals], and it’s easy to liken him to Lemmy. He’s made Richard [Chadwick, drums] and myself really perk up. Haz is only twenty-three years old. He’s been a Hawkwind fan since he was twelve. We got used to seeing him at gigs, and later on he became a roadie. After hearing him play bass I had to tell Niall: “Haz is joining the band. Computer technology is now your vocation.” He’s made a huge difference.

There are thirty-nine former members of Hawkwind, but I only sacked a couple of them

I’m not this tyrant who says: “That’s it. I fucking hate you.” People usually just leave of their own choice, and quite often they come back again. Most of the time it’s a gentlemanly agreement. But I’m the guy who makes those decisions. Someone’s got to take the responsibility or it becomes a shambles.

Lemmy was among those that I did sack

But I really didn’t want to. I’m not sure he ever forgave the band. Certainly he never forgave Nik Turner [saxophonist], because he had engineered it all to get Paul Rudolph into the band. Lemmy and I became friends again, and I often joked with him that had we not given him the axe he would not have done what he did with Motörhead.

Losing Lemmy made me contemplate my life

We also lost Jason [Stuart, keyboard player, who died in 2008], John Harrison [bassist, who died in 2012] and Huey [Lloyd Langton, guitarist, also 2012]. And when those things happen it shakes you up. You spend so much time together that you almost became a family. I still feel a bit sad about Lemmy. He was not a well man. We spoke about him stopping playing music quite a lot, but he wouldn’t listen.

I’m having too much fun. As long as I continue to enjoy myself and it’s comfortable on the road – I’ve got to have a nice tour bus – then I’ve no plans to call it a day. I turned seventy-six in August. But although I get aches and pains, age is really a number to me. I swim a lot, and living on a farm keeps you fit.

With goblins lurking away in forests, and tales of woodcutters, our new album, Into The Woods, has a rural feel. It was mostly recorded live in our studio. I haven’t enjoyed making an album this much for quite a few years.

I still have Some unfulfilled ambitions

I’ve been asked many times to write a book, but I know too many old boys that have been involved in a lot of villainy that I couldn’t talk about. Even those who are now dead have kids that are vicious. I would never break the code of honour. I’d like to go to Tibet. I’ve written a lot about space, and I’d love to visit a few other planets. It’ll never happen, sadly.

Hawkwind could continue after I die

I don’t see why not. We support a lot of good charities, and I’d like to think that talking about the subjects we embrace, doors are opened to things people might not even consider. Kids go into the butchers with their mum and dad to buy meat and they’ve no idea where it comes from. If we play even the smallest part in helping to educate that next generation, I’d be very proud of that.

Into The Woods is released on May 5 via Cherry Red Records.

Hawkwind - Into The Woods album review