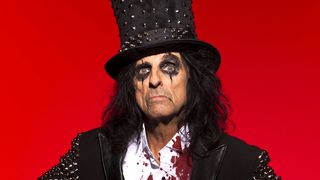 I realised a long time ago that I don’t really want to be president of the United States – I just want to sell T-shirts. That’s the honest approach. We have all these excess ‘Alice For President’ T-shirts and we want to sell them. So the best way to do that is run again.

I can’t imagine why anybody would want to be President of the United States. It’s absurd. In 1972, when we started doing this, I was the most absurd person on the planet in the eyes of the people of the United States, so I guess [President Richard] Nixon was the perfect opponent. Then what happens? You get stuck with all these T-shirts. Now you’ve got to sell them. So that’s why I’m running for President again.

ALWAYS GIVE THE PEOPLE WHAT THEY WANT

I say ‘no more pencils, no more school books’. School should be out forever. Everybody hates school, so I’m going with stuff that works. Every politician knows that you’ve got to tell the people what they want to hear. Obviously, this’ll only work if school kids can vote, so I say let kids vote. I also think we should cut off people’s right to vote when they reach a certain age. Thirty would be good.

TWO HEADS ARE BETTER THAN ONE

Donald Trump or Hillary Clinton? They should both win. And this is why. Put Donald in charge of finance. That’s what he does. Hillary was Secretary of State, so take her phone away and have her handle foreign affairs. Why not have both of them? Let one do what he does best and let the other do what she does best. There’s the solution right there. Then, when a decision needs to be made, they need a third guy, who just doesn’t care. They should hire me to do that. Every time a decision needs to be made they can turn to me and I’ll say: “I don’t care. Whatever… Hey, buy a T-shirt.” It’s the Gene Simmons approach to presidency.

Every time you get on an aeroplane, you sit, lower the tray table of the seat in front and it’s slick. Now this is not logical. If you drill a hole in it that fits the cup, the cup won’t spill, and nobody’s figured that out yet? It’s like they’ve apparently never heard of seat belts on Star Trek. So every time they hit a bit of space turbulence everyone falls all over the place. With all their technology, nobody has a seat belt. Sometimes it’s like we miss the forest for the trees.

Lemmy would look great up there. Lemmy was everybody’s favourite guy and he went out the way he wanted. The last thing Lemmy said to me was [adopts massively inappropriate posh English accent]: “Alice, darling. I’ve quit drinking whisky” – this was about a week before his death – “and I’ve started drinking vodka.” As if his liver knew the difference. So I said: “Just keep telling yourself that’s a good idea.”

Lemmy ended up at the Rainbow where the Hollywood Vampires [the 70s celebrity drinking club and now Alice’s rock supergroup] used to hang out. That was our watering hole. So if he had stayed alive he’d have been in the Vampires, because he was certainly a charter member.

Groucho Marx was like [US diplomat] Henry Kissinger. He was very well thought of in political circles and there were presidents who would write to Groucho to get his take on different people. Truman, Eisenhower, people like that would ask him: “What about this guy Tito in Yugoslavia, or Mussolini in Italy?” And Groucho would give them advice. He was an interesting guy, and as insane as he was smart. We need to get his head on the fifty-dollar bill, or maybe a forty-dollar bill would be more appropriate. Who’s going to vote against that?

There should be a ban on talking during movies in movie theatres and any transgression should be punishable with three to four months in jail. Nothing enrages me more than people who talk or text during movies – they seem to think they’re at home watching a video with their friends. I always want to go over and say, “Is this your first time at a movie theatre? Because when the movie’s on we need to hear what that guy up there is saying, not what you’re saying.” And people in a multiplex who keep getting up to check what’s happening in the movie theatre next door should be put in a pit with a mariachi band playing as loud as they can for about an hour.

BEACHWEAR SHOULD ALWAYS BE WEIGHT-APPROPRIATE

There are many things that need to be abolished, and near the top of that list are Speedos. There should be fines or even imprisonment for people wearing Speedos or bathing suits that are inappropriate for their body. Sell Speedos to guys that weigh a hundred-and-twenty pounds, sure, but anyone else? These people need to be saved from themselves.

NO ONE NEEDS A NEEDLE

There’s got to be a way to eliminate needles in every area of healthcare. If something can be delivered in a shot, it can be delivered in a pill. I’m needle-phobic – as you can see [rolls back his sleeves], I have no tattoos. So I’d ban every kind of inoculation and find an alternative. Maybe just give everybody a leech, then squeeze out the leech – there’s your blood sample. Sometimes going backwards is the best way forwards.

IF YOU WANT A SELFIE, BE PREPARED

Selfies are not the problem, it’s the fact that no one knows how to use their phone. If everyone that wanted a selfie would just go ‘click’, that would be great, but it’s: “Oh, I’ve got to turn this around. Do I hit that? Just wait a second…” I recently saw a T-shirt that said: ‘Fuck Your Selfie’. Maybe the greatest T-shirt ever.

Women are more intelligent than guys. That’s a given. Until I met Orianthi, I never thought of having a female guitar player. Not because they were female, but because I’d never heard one that good before. Then when Orianthi left, Hurricane Nita Strauss got up on stage and just nailed it. If they can handle the songs, they’re in. If a three-headed giraffe came along and could play great, I’d take him… Actually, if a three-headed giraffe could do anything I’d put him in the band. I don’t care what it is, because that’s a draw.

ON STAGE, ANYTHING GOES… EXCEPT GUNS

Knives, I’m awfully good with. Swords, yes. Alice is very swashbuckling, it’s part of his persona. Guns? Either take them all away or give everybody one – you get on an aeroplane, they give you a Diet Coke, peanuts and a gun. Now if somebody gets up to try and take control of the plane, he’ll turn around to find everybody standing behind him with a gun.

One morning I awoke with only vague recollections of the night before. I couldn’t quite recall what happened, but I knew it involved Steven Tyler, a gun and a Rolls-Royce. All I could remember was I was driving, he was sitting next to me and had a boot gun. I had to look in the papers to check if any 7-Elevens had been robbed.

When I lived in Benedict Canyon, I had a pool house. One morning I got up, and there’s Ronnie Wood. He’d been living in the pool house for a week and I had no idea he and his wife were in there. “Hello! We’re running low on wine!” “Okay, I’ll go and… How long have you been here?”

That was the way it was in LA back then. Keith Moon would be living at your house for a month, you’d go out for a half-hour, come back to find Micky Dolenz sitting on the couch. Nobody lived normally, everybody was allowed to go to anybody’s house and crash there. My wife was going: “Who are these people?”

THE SECRET OF ETERNAL YOUTH? NEVER GET OLD…

The Alice Cooper thing works because I’ve never gone on stage thinking: “I’ve got this.” I always think the audience is thinking: “He’s over the hill”. But I know they’re going to love No More Mr Nice Guy, Under My Wheels… because I’m going to sell them exactly the way I sold them in 1972. When I’m on stage I’m twenty years old. I never ever think that I’m sixty-eight. It even surprises me that I can be so committed to it every night. You’d think I’d get tired of it or bored with it, but the Alice character will not let me get bored with it. I’m having more fun now than ever… So why not buy a T-shirt?

The Story Behind The Song: Elected by Alice Cooper