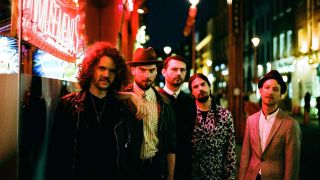 Ten years ago Dutch band De Staat shared a communal house in Nijmegen, the left-wing Dutch town affectionally known as "Havana-On-The-Waal", with each band member receiving a monthly stipend of €200 from the government to encourage their music.

They were weird, producing angular, jerky blues rock that didn't so much reflect the sum of their influences as much as make them sound like a band who didn't listen to other bands at all.

A decade on, things have changed. They're still getting money from the government (in 2016 the band were awarded a €236,000 four-year subsidy from the country's Performing Arts Fund), but the music has moved on.

Traces of the blues have all but vanished, and while the angularity remains, a typical De Staat song truly sounds like music reinvented. Much of it is almost childlike, with nagging four-to-the-floor rhythms confounded by a bass that accents the upbeats, giving everything a lollopping momentum, as if the music is powered by marching Oompa Loompas, soundtracking a demented circus parade.

They're a serious draw in The Netherlands. Back in March this writer and 6000 fans have crammed into AFAS Live in Amsterdam for a performance that felt like a victory parade with a coronation attached. Holding it all together was frontman Torre Florim, with a staccato, stream of consciousness delivery that took in everything from teeth-whitening and Photoshop to alt-right meme Pepe the Frog across a brilliant, bewildering couple of hours.

From the techno screeches that announced the arrival of set opener Me Time to the closing KITTY KITTY – later voted rock video of the year – which flipped from a gabber-influenced backdrop to a transcendent middle section that sounded like Topographic Oceans-era Yes (then back again) – the set was a cartwheeling, discombobulating adventure.

There were three guitars on stage, but they didn't sound like guitars. Phoenix started with violent blasts of Hans Zimmer-style orchestration, Florim atop a platform, multiple spotlights gilding his skull, before the beams softened and the song took a tender turn. The maddening Pikachu was delivered almost as a rap battle. Fake It Till You Make It featured bhangra rhythms and wildly over-clocked auto-tune.

It was bedlam with a seizure-inducing lightshow, and all the songs we've mentioned were purloined from this year's Bubble Gum album, the consolidation of a dozen year's worth of experimenting. They've refined their craft to the point where a De Staat song sounds like no one else, with those jerking, toddler-friendly rhythms backboning songs as likely to sweep in influences from hip hop and dance music as they are from prog rock.

If you're looking for tradition you won't find it, but if you're willing to open your ears to something that's simultaneously simpler and more left field than you're used to, Bubble Gum might be for you. There's something peculiarly primal about it.

Late in the year, De Staat played at The Garage in London, a venue less than a 10th of the size of their Amsterdam show. Up close it's a different experience, and the slick, machine-drilled choreography is more apparent. But with the dazzling light show still in place and a crowd going nuts – delighted to be able to witness the band at such close quarters – it was another evening of vivid, kaleidoscopic delirium, with Bubble Gum at its heart.