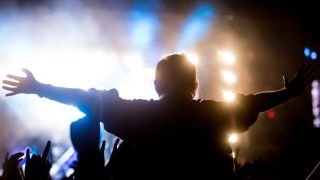 Some might consider the power ballad to be a guilty pleasure. Not so at Classic Rock.

On February 14 – Valentine’s Day, of course – we presented the definitive list of The 40 Greatest Power Ballads. But now, we’re going deeper… this time, it’s not about the monster hits.

For the dedicated expert in melodic rock, some of the songs included here will be long established as cult classics. Some were recorded by megastars, others by those poor sods whose big break never came. But in every case, the story is the same: a great song that ended up a lost classic…

The song is well known as a hit for reggae band Aswad in 1988. It was co-written by Diane Warren – author of hits by Cher, Aerosmith, Alice Cooper and many more – and was originally recorded by Tina Turner. But the best version of Don’t Turn Around was by a little known and short-lived rock band named Eyes, led by powerhouse singer Jeff Scott Soto. In a varied career – including stints with Yngwie Malmsteen, Journey, and melodic rock supergroup W.E.T. – the first Eyes album is one of the best that Soto has made. And on Don’t Turn Around, reworked as a melodramatic ballad, he transformed a sweet little pop song into an AOR juggernaut.

In 1984, Night Ranger had the biggest hit of their career with Sister Christian, one of the all-time great power ballads, which reached number five in the US. This was no fluke: the band’s mastery of the art was evident on subsequent hits such as Sentimental Street and Goodbye. And they’ve still got it. On the 2011 album Somewhere In California is Time Of Our Lives – a modern classic.

Classic Rock writer and power ballad enthusiast Jon Hotten has a theory based on the monkey-and–typewriter principle: that every two-bit hair metal band had at least one great song in them. Danger Danger had plenty of big, dumb party anthems, such as Naughty Naughty and Monkey Business. But their great song was I Still Think About You, an acoustic ballad with a killer chorus. They even had the perfect video for it: a black-and-white on-the-road piece, styled on Bon Jovi’s Wanted Dead Or Alive. But for Danger Danger, it was too late. In 1991, when this song was released as a single, alternative rock was on the rise.

No British singer has a finer AOR pedigree than John Waite, a Jedi master of the power ballad. As a solo artist he had a US number one in 1984 with Missing You, his signature song. And five years later, as frontman for melodic rock supergroup Bad English, he repeated the trick with When I See You Smile. By contrast, Welcome To Paradise was a complete stiff, peaking at number 85 on the US chart in 1985. But it’s a wonderful song, sung as only he can, with a lyric expressing the loneliness of an Englishman in New York.

A relaxed attitude to spelling was not the only unconventional feature of Spys. Strangely for a band that was led by two ex-members of Foreigner – bassist Ed Gagliardi and keyboard player Al Greenwood – their music was a mix of melodic hard rock and a left-of-centre new wave sensibility. This was not a winning formula: the band’s two albums flopped. But was good stuff on both records, and on the second, Behind Enemy Lines, the poignant and richly atmospheric synth-rock ballad Younger Days.

In the late 80s there were three great AOR bands in the UK: FM, Dare and Strangeways. None of them made it big, but all made brilliant records. Strangeways, formed by Scottish brothers Ian and David Stewart, hit their peak in 1986 with their second album Native Sons, on which their new American singer Terry Brock elevated their music to a whole new level. Brock was the next best thing to Steve Perry, and showed it on Goodnight L.A., the killer track on a near-flawless album.

Never mind Smells Like Teen Spirit – the biggest song of 1991 was not a grunge anthem but the mother of all power ballads. Bryan Adams broke all records with (Everything I Do) I Do It For You. It topped the charts in 18 countries, and in the UK it still holds the record for the longest running number one in history – a whopping 16 weeks. But Adams’ greatest ballad was not a hit, or even a single. Native Son was an album track on 1987’s Into The Fire. With a lyric that addressed the struggles of North American Indians, this song revealed a more serious side to the Groover from Vancouver. And he put everything he had into it.

They were hyped as Britain’s answer to Bon Jovi, and with their second album Tough It Out it seemed as if FM couldn’t fail. They even had a couple of songs co-written by Desmond Child, the so-called ‘hit doctor’ who had applied his Midas touch to hits for Bon Jovi, Aerosmith and Cher. In the end, Tough It Out didn’t do the business for FM. But it is, arguably, the best British AOR album ever recorded. And among the many tracks that coulda woulda shoulda been hits is Every Time I Think Of You, a perfectly crafted song, brilliantly sung by Steve Overland.

The debut album by Tyketto was aptly named. Don’t Come Easy was a great melodic rock record, but when it was released in 1991, the band’s record company Geffen had other priorities – chiefly, Guns N’ Roses and Nirvana. As a result, Tyketto got lost in the shuffle and were dropped by the label while recording their second album Strength In Numbers. That album was eventually released in the UK by indie label Music For Nations, and its highlight was End Of The Summer Days – a classic song built on acoustic guitars, with a wonderfully evocative lyric and vocal from Danny Vaughn, a guy whose talent has always deserved a bigger stage.

This was not a band blessed with star quality. AOR guru Derek Oliver once said of From The Fire: “They looked like a bad shipping accident.” What’s more, the New Yorkers’ debut album – cheekily titled Thirty Days And Dirty Nights – was doomed to failure when it was released in 1992, at the height of grunge mania. But the album is a cult classic – with the majestic ballad Tears Cried In The Rain its crowning glory.