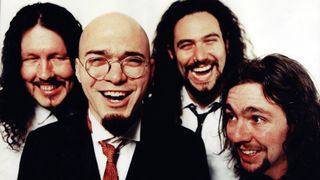 It wasn’t all Fred Durst, Dimebag Darrell and Kurt Cobain in the ‘90s, you know. Despite the persistent myth that metal died on its arse during that decade, there were scores of great bands making incredible music: thrash, groove metal, grunge, black metal, metallic hardcore, stoner rock and yes, even nu-metal. The problem is that everyone bangs on about the same old usual suspects so much that many great but unsung bands have become lost in the mists of one-dimensional nostalgia. This simply will not do, so here are ten bands from the decade that metal forgot…

With a sound that married the mid-paced crunch of Metallica’s Black Album to the muscular attack of the nascent groove metal scene, Dearly Beheaded were British metal’s brightest hopes for a very short time in the ‘90s. They released two strong albums, 1996’s Temptation and 1998’s Chamber Of One, before splitting up amid the goonish melee of the Limp Bizkit era. They could, and should, have been contenders.

Combining death metal with the insistent rumble of stoner rock had been done plenty of times by the mid 90s, but Korpse’s take on the idea was something else entirely. Monstrously heavy but curiously accessible, the Scottish crew’s second album Revirgin broke new ground in 1996 while (accidentally) pre-empting the genre-mincing power of Gojira with wild percussive grooves and an underlying intensity that, in a sane world, should have made them superstars.

Emerging from the intermittently exciting funk metal scene of the late 80s, The Beyond sounded utterly unique: the grooves of their goofy peers filtered through the refined rock textures of Rush and dowsed with laudable British eccentricity. Debut album Crawl bulges with stunning songs and sounds wholly fresh today – despite a snare sound that sounds like a Tupperware pot being thwacked with a wooden spoon – and drummer Neil Cooper (now with Therapy?) is an undeniable, subtly funky force of nature throughout. The follow-up, Chasm, was equally great. What a band.

Marking the halfway point between metals groove and nu, Pulkas were British bruisers with a profoundly timely sound that briefly looked like the answer to the UK scene’s aspirational prayers. 1998’s Greed album was a dark, brooding beast but, unfortunately, the band never quite hit their stride and were overlooked in favour of gurning meatheads in enormous trousers and stupid hats. A disgraceful injustice, particularly given that songs like Loaded are practically guaranteed to make you want to smash everything in sight.

The nu-metal era was full of terrible bands that arrived, did nothing of significance and then vanished to no one’s disappointment. Not so Out, a French band with some pretty smart musical ideas, a refined grasp of the potency of electronics and some absolutely raging tunes. Despite being released via Roadrunner, their brilliant 1998 album X-Position was largely ignored because this was the pre-Gojira age and, with very few exceptions, French metal wasn’t taken remotely seriously. Shame.

Widely tipped as heavy music’s next big thing, Mind Funk looked unstoppable when they released their self-titled, funk-tinged, groove metal debut in 1991. It didn’t quite work out and the band steadily sank into obscurity, but second and third albums Dropped (think heavy grunge with massive tunes) and The People Who Fell From The Sky (outright stoner doom) were every bit as brilliant as that debut and quite how this idiosyncratic mob fell through the cracks is one of the great mysteries of 90s metal.

Grunge was musically interesting for roughly 18 seconds in 1991, but Liquid Jesus shrewdly lurked on its periphery and enjoyed the freedom that such an ephemeral association entailed. Brave, diverse and full of insidious melodic anthems, their 1991 album Pour In The Sky remains one of the most absorbing albums of the era: a subtly psychedelic masterpiece with charm to burn. Quite how the band were ignored in favour of smarmy cack like Stone Temple Pilots is anyone’s guess.

While the world thralled to the sound of drooling smackheads in plaid shirts, Grotus were messing with heavy music’s intrinsic formulae and making some of the strangest and most distinctive music of the ‘90s. Combining DIY industrial clatter with lolloping grooves and dense, Neurosis-like atmospherics, Grotus sounded like the future when metal was in dire need of some focus and foresight. Check out the mind-blowing Slow Motion Apocalypse album for ample proof.

Although they formed in NYC in 1986, urban thrashers Demolition Hammer came into their own with a trio of albums released between 1990 and 1994. Alongside the likes of Pantera, Machine Head, Skinlab and Pro-Pain, they forged a new path for the thrash scene’s hardiest survivors and made some brutal and irresistibly intense music along the way. But do they ever get the props they deserve? Do they bollocks.

With the possible exception of Japan, no one does batshit crazy like the Finns. Xysma were utterly bonkers: they began life as a straightforward death metal band with songs called things like Paradise Of Steaming Cadavers, but by 1993’s First And Magical album they were throwing 70s hard rock riffs, acoustic psychedelia and all manner of sonic kitchen sinks into the mix. Years ahead of their time and probably ignored as a result, Xysma were mad scientists on a mission to blow minds and give underground metal a sturdy kick up the turdpipe.