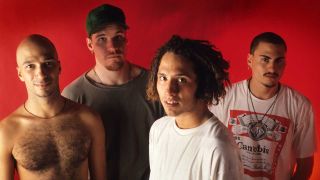 Hip-hop and metal have been relatively comfortable bedfellows for the best part of three decades now, even if the results of a collision between the genres haven’t always been spectacular. At its best, however, rap-metal (or whatever we’re calling it this week) remains one of the most exciting noises made by anyone, ever, and even most recalcitrant Darkthrone fans will admit in private that they’ve tapped a toe to Beastie Boys’ No Sleep Till Brooklyn (which, to be fair, does also feature a guitar solo by Slayer’s Kerry King). Not to be confused with nu-metal (although the two genres do overlap, obviously), here are ten essential albums where hip-hop got heavy… and vice versa.

They may not have been the first, but they certainly nailed the rap-metal formula with the greatest power and verve: Rage Against The Machine made virtually everybody’s hair stand on end when they exploded into our world in 1992. Their debut album is still stupidly exciting and despite being brutally overplayed, Killing In The Name still rules. The band’s follow-up, Evil Empire, is every bit as good, but this is the rap-metal mothership.

Far more popular in the US than on this side of the Atlantic, 311 have been blending hip-hop, reggae and metal together for 28 years, providing a sunny and melodic counterpoint to Rage Against The Machine’s hardcore minimalism. Music was the band’s official debut and it’s a masterful riot of loose-limbed grooves, thunderous bass, anthemic choruses and rapid-fire flow.

Few people actually watched Judgment Night, but its soundtrack has passed into rap-metal legend. An all-star meeting of rap and rock minds, it brought together Slayer and Ice-T, Helmet and House Of Pain, Pearl Jam and Cypress Hill and Biohazard with Onyx. Perhaps surprisingly, the results were genuinely brilliant, particularly when Faith No More and Boo-Yaa T.R.I.B.E. joined forces for the scabrous Another Body Murdered.

Never a man afraid of a challenge, Ice-T formed Body Count at the peak of his hip-hop fame and went for it like a man possessed. Notorious for the LAPD-baiting Cop Killer (replaced on later pressings by a collaboration with Jello Biafra), Body Count were occasionally shambolic but colossally entertaining, as Ice’s verbal skills erupted over brutish street-metal riffing. Fans of socially-conscious lyrics might wish to venture elsewhere, mind you.

While Limp Bizkit were rapidly conquering the world, the vastly superior (Hed)P.E. were in a somewhat different boat. Broke should have made the band massive: it’s rammed with memorable hooks, MC Jared has the maddest of lyrical skills (albeit with occasional descents into gurning misogyny) and an atmosphere of genuine menace makes the whole thing seem so much more convincing than Fred Durst. As an added bonus, Serj Tankian pops up on the infectious Feel Good.

It’s undeniably hard to sing Kid Rock’s praises with a straight face, but if you can disengage your brain for an hour, Devil Without A Cause remains a ludicrously entertaining slab of late-90s idiocy. His recent transformation into the white trash Kenny Rogers may have taken the sheen off lobotomised classics like Batwitdaba, Cowboy and Welcome 2 The Party, but 18 years ago this was a reliably ass-kicking party soundtrack.

Unsung heroes of the so-called ‘funk metal’ movement that brought us Faith No More, Red Hot Chili Peppers and many other bass-slapping weirdos, South Bronx renegades 24-7 Spyz were the missing link between Bad Brains’ forward-thinking hardcore and Living Colour’s slick soul-metal. Their debut album still bristles with snotty energy and a wide-eyed lust for cross-pollination, not least on the band’s immortal cover of Kool And The Gang’s Jungle Boogie.

Most truly notable rap-metal acts have come from the US, but Senser defied the odds and conjured their own wild hybrid of hip-hop and heaviness that gloried in its own multicultural Britishness. Led by rapper Heitham, the band’s furious political edge and fervent embracing of electronic music and skull-crushing bass made them a UK alternative festival staple in the ‘90s. Their debut album, Stacked Up beautifully encapsulates their explosive brilliance. Listen to Eject and try not to backflip off the sofa, we dare you.

No one would dare to question Biohazard’s roots in New York hardcore, but by their third album the Brooklyn bruisers were increasingly absorbing hip-hop influences too. Songs like Down For Life, Tales From The Hard Side and How It Is (featuring a guest appearance by Cypress Hill’s Sen Dog) brought tough street-metal grit to bear upon flagrant boom-bap grooves. Rap-metal by default rather than design, it was a natural and neat fit for a band that deserves more credit for their pioneering nous.

Always a band with strong links to rock and metal – check out the Black Sabbath samples on 1994’s classic Black Sunday album for proof – Cypress Hill are one of the few hip-hop acts to dabble in heavy music and come out smelling of roses (and weed, obvs). Skull And Bones’ first half was a full-on rap joint, but its second half was an epic crossover knees-up, as members of Fear Factory and Rage Against The Machine backed B Real’s crew on pummelling anthems like Valley Of Chrome and the brilliant (Rock) Superstar.