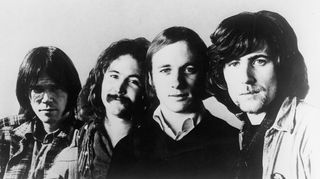 Darlings of the post-Woodstock nation, the superstar line-up of Crosby, Stills & Nash (and later Young, too) brought together ex-members of Buffalo Springfield, The Byrds and The Hollies. Dubbed The ‘American Beatles’, CSNY’s songs told tales of past lovers, political unrest and a rocky road ahead - often while battling inter-band discord in their quest for pure vocal harmony. These are 10 of their best songs.

Written as a reaction to the assassination of Bobby Kennedy in 1968, this moody David Crosby song on Crosby, Stills & Nash’s debut album was a warning of darker days ahead. The chorus refrain, ‘It appears to be a long time before the dawn’, echoes the foreboding atmosphere. With the tragedies at Altamont and Kent State ahead, it was not too far off the mark.

The title track of their second album – their first with Neil Young – opens in jazzy 4⁄4 time before moving into a dreamlike tempo befitting the lyrical content. Crosby delves into a past life, reflecting ‘I feel like I’ve been here before’. The song inspired them to appear in retro Civil War garb for the album’s cover shoot.

One of a handful of songs Nash bought with him from the latter days of The Hollies. Frame-worked by the steel guitar of guest player Jerry Garcia, Nash’s plea for youthful understanding touched the post-Woodstock generation. CSN&Y, and their audience, were growing up. Inspiration for the song came from Nash viewing a photograph by Diane Arbus titled Child With Toy Hand Grenade In Central Park.

The addition of Canadian singer-songwriter Neil Young in mid-1969 added an extra creative dynamic to the band. Originally recorded with Young’s Crazy Horse, the country-tinged lilt of Helpless was one of the highlights of CSN&Y’s Déjà Vu. Meanwhile, Young’s own solo career was about to take off big time with the After The Goldrush album.

This ode to domestic contentment was written by Nash during the time he lived with Joni Mitchell in Laurel Canyon. The song’s spiralling melody is a perfect foundation for them to layer on the harmonies and counter harmonies. It’s one of their most durable songs and you’ll often hear it in TV ads and film soundtracks.

Another Hollies remnant of Nash’s that would find a home on their self-titled debut album, Marrakesh Express captures a bright and breezy spirit of adventure, driven along by a Hammond organ played by Stills. Nash derived the idea for the song on a 1966 vacation that saw him travel by train from Casablanca to Marrakesh.

Here Stephen Stills brings elements of three different songs into one concise package. He draws on Questions from his old band Buffalo Springfield, plus there’s a jam session with drummer Dallas Taylor tagged on as a delightful free-form coda. And, of course, the yearning harmonies are to die for.

Co-written by Jefferson Airplane’s Paul Kantner (their version appears on the Airplane’s Volunteers album), this captivating tale of survival in a nuclear holocaust is wrapped around an arrangement that mirrors the ominous undertones of the subject matter. Both Jefferson Airplane and Crosby, Stills, Nash & Young performed the song in their respective sets at Woodstock Festival.

Composed by Neil Young in pained reaction to the Kent State shootings of May 4, 1970, Ohio was rush-released as a single, scoring them a Billboard Top 20 hit. Its hard-hitting lyrical message was in sharp contrast to the peace-and-love vibes of the Woodstock era. Crosby’s fear and loathing is plainly evident during the fade as he bellows ‘Four, why? Why did they die? How many more?’.

Another deft amalgamation - as the title implies, this is a suite of four short songs written by Stills and seamlessly interwoven. Lyrically it refers to his relationship with folk singer-songwriter Judy Collins. Opening with glistening acoustic guitars, it builds to a searing, Latin-flavoured climax, ending on a repeated ‘doo-doo-doo-da-doo’ refrain of life-affirming joy.