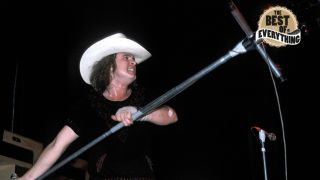 Hailing from Jacksonville, Florida, southern rockers Lynyrd Skynyrd were one of the most succesful bands of the 1970s.

In October 1977, three days after the release of their fifth album Street Survivors, the band boarded a flight to Baton Rouge, Louisiana where they were due to play the following evening.

Due to a faulty engine, the plane attempted an emergency landing. Ronnie Van Zant, Steve Gaines, Cassie Gaines – along with road crew Dean Kilpatrick, pilot Walter McCreary, and co-pilot William Gray – were killed in the crash. The rest suffered serious injuries and halted the band’s activities for 10 years.

The band have continued performing to this day and have 60 million album sales to their name. Ricky Medlocke – who drummed for the band between 1970-71 – rejoined the band in 1996 as guitarist. We challenged him to pick the 10 definitive Skynyrd tracks.

“When it comes to Skynyrd songs, my favourites tend to be the ones that are a little off the beaten track,” says Rickey. “The ones on the back burner, as it were.

“Sure, I love the popular ones – Freebird, Sweet Home Alabama, Simple Man – but what I’ll always lean towards is the outlaw side of the band. The heavy rock songs. Those are the ones I just get into playing, and those are the ones I’ve mainly concentrated on here…”

TUESDAY’S GONE (Pronounced ‘Lĕh-‘nérd ‘Skin-‘nérd, 1973)
“It’s like a lot of blues songs in that this one talks about being away from your woman. But Ronnie Van Zant’s lyrics really do capture the spirit of losing someone: ‘Train roll on down the line/Won’t you please take me far away’… man, that hits you!”

MISSISSIPPI KID (Pronounced ‘Lĕh-‘nérd ‘Skin-‘nérd, 1973)
“I grew up listening to the Delta blues through my dad. And this is really brings back those early memories. I also love the fact that when we do this live now, I get to play mandolin.”

THE NEEDLE AND THE SPOON (Second Helping, 1974)
“This one talks openly about the dangers of drugs, obviously. But it’s not downbeat. It has a great vibe and attitude. And there’s a lesson in it for us all.”

ON THE HUNT (Nuthin’ Fancy, 1975)
“This is about going out and looking for some leg! You know, prowling around for that one woman you wanna spend the night with. It’s a good time song, and we’ve all done it, right?”

DOUBLE TROUBLE (Gimme Back My Bullets, 1976)
“I love the way this really rocks. It has a such a cool vibe. You can’t go wrong with it. There’s a definite stomp to it.”

CRY FOR THE BAD MAN (Gimme Back My Bullets, 1976)
“Again, this is from Gimme Back My Bullets. This one has so much heart. It’s about the band’s original manager, Alan Walden, and how he was treated by the guys. What I love here is the vulnerability and regret in the lyrics.”

GIMME BACK MY BULLETS (Gimme Back My Bullets, 1976)
“This isn’t about guns, as you might expect. It’s about the band wanting their bullet back on the charts. They wanted to have more success, and the bullet is all about moving up the chart again. I’d rate this alongside Saturday Night Special (from Nuthin’ Fancy). Again, that might seem like it’s all about guns, but there’s a lot more going on if you read the lyrics carefully.”

SEARCHING (Gimme Back My Bullets, 1976)
“What I love about this is the way it talks about a young man wanting advice from a real wise old man. It will resonate with everybody, because it could be your dad, my dad, anyone’s dad.”

TRAVELIN’ MAN (One More From The Road, 1976)
“This is from One More From The Road – the studio version is on the Twenty album. Y’know, this is what we do. It’s all about the life of a band, forever travelling around, never staying still. It’s a great song to perform live, because it captures what a band does. You can sense Ronnie’s vibe running through it and it captures what us touring musicians are all about. Wanna know what life’s like on then road? Listen to this.”

THAT SMELL (Street Survivors, 1977)
“It’s all about what happens when drink and drugs overtake you. The song was written at a time when the band were going through a bad phase with with addictions, and it’s a warning to everyone about what this can leave to. ‘The smell of it surrounds you’… that’s a powerful line.”

One More For The Fans is out now. For more information, visit the band’s official website.