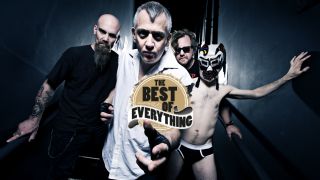 Punk rock lunatics The Dwarves are probably better known for causing mayhem than for making music.

But in a career spanning over 30 years, they’ve released some truly classic albums, with a sound that takes in everything from Motown and ‘60s garage rock to hip hop, speed metal, and, of course, punk. Perhaps one of rock’s most underrated lyricists, frontman Blag Dahlia takes a moment off from upsetting people to talk us through his 10 favourite Dwarves songs…

EVERYBODIES GIRL (The Dwarves Are Young And Good Looking, 1997)
“Everybodies Girl was the song that launched a thousand blow jobs for me. It was the song that got us signed to Epitaph and made a bunch of California bitches finally like the Dwarves. It’s the best pop/punk song ever, and it still keeps that Dwarves idea of sleeping with far too many people. It’s got the classic Spike Slawson vocal from Me First And The Gimme Gimmes, which makes it very California, and ‘Ooh, you’re creepy’, which is a real phone message. Everybodies Girl is pretty much the apex of the pop side of the Dwarves to me.”

FREE COCAINE (Toolin’ For A Warm Teabag, 1988)
“Free Cocaine was based on the song Money by Barrett Strong, one of the first Motown hits. As I explained to my mom when she got all upset about it, it’s not about cocaine, it’s about getting things for free. My mom worked at the VA (Veteran’s Association) and she was all like, ‘When the vets come in and they’re all on cocaine, I feel so badly for them’, and I said, ‘Mom, I’m not sharing with them!’ Free Cocaine was sort of the end of the psychedelic garage Dwarves, which was the original Dwarves, and we just kind of morphed into more of a punk thing. We’d just moved out to California. I’d grown up going to see punk bands, but we were doing our ‘60s garage thing, and nobody really got it. It took another 20 years and bands like the Hives and the White Stripes for people to finally get hip to it.”

I’M A LIVING SICKNESS (Horror Stories, 1986)
“I’m A Living Sickness was a cover song on the first Dwarves record, Horror Stories. That was recorded in ‘85 and came out in ‘86, and that was a punky, nasty, fuzzy version of ‘60s garage, a very obscure song by a band called the Calico Wall. ‘60s garage was really where the Dwarves started and everything kinda spun off of that.”

DRUG STORE (Blood, Guts And Pussy, 1990)
“That was a song I really liked from the Blood, Guts And Pussy album. It was sorta like the Stooges meets the Ramones, and it ripped of the Misfits’ Halloween. It had elements of a lot of things in about one minute. I liked that song because it was about, when I was a kid you’d see people just hanging out in front of the drug store, and then by the ‘80s it was people hanging out outside the 7⁄11. Now they just call them homeless people.”

SPEED DEMON (Thank Heaven For Little Girls, 1992)
“Thank Heaven For Little Girls had some cool songs, and Speed Demon was a fun one because it had like a mosh part and a hardcore part. That was a song that Hewhocannotbenamed came up with, and it also had a Charles Manson sample if you got the right version on vinyl. Before we moved to California we didn’t know what speed was; in Illinois it was what girls took to stay on a diet or to stay up and do their homework. Then we moved out here and it was like, ‘Oh, we get it!’ I was pretty fascinated by girls on speed and the bizarre things they’d do. They just seemed to be unhinged in a way that I hadn’t encountered back home.”

ANYBODY OUT THERE (Sugarfix, 1993)
“That’s a great Hewho riff, and a great rousing song to get everybody going. And it was really the first Dwarves song that didn’t directly say ‘fuck’, and that showed some level of vulnerability, like, ‘I’m lonely’. It was really a step forward for us. It just asks the question, ‘Is there anybody out there?’ and the answer is no.”

PIMP (The Dwarves Are Young and Good Looking, 1997)
“That was a very Ramones kinda song, very simple, but it had the bit at the end that was like a take on the Beatles. I don’t know if anybody got that. When I first moved to San Francisco, I encountered skinheads for the first time, which were a curious bunch. Back then, they didn’t pretend that they weren’t racist or whatever they do now. They were full on racist, and it was full-on criminal behaviour. I personally never went for any of it, but it was better to be on their good side because they’d kick the shit out of punk rockers or whatever. With the Dwarves, they didn’t wanna come too near us because there was a naked guy, and we had kind of grudging respect from them. But these skinheads, particularly nasty ones, would go to the Greyhound bus terminal and just hang out waiting for girls from Minnesota or Iowa to get off the bus. That’s where that line comes from: ‘I met you at the Greyhound bus/In a world of passionate lust.’ If you go to a Greyhound [station] you will always see some suspect behaviour.”

OVER YOU (Come Clean, 2000)
“Over You, again, was a kind of vulnerability song, and that was the first song we did that had sequence drums and shit on it. People were like, ‘What are you trying to be? Limp Bizkit and shit?’ It was always funny because that started that era of genre-hopping for the Dwarves, we’d do all different kinds of genres, but we’d do one hip hop thing or one speed metal thing and people would think we were selling out. I’m like, ‘Nobody’s buying, dude!’ Anybody who likes those genres doesn’t like us because we’re basically a punk band. But that’s kinda when the genre-hopping started, and Over You had some pretty amazing production and some unexpected stuff, cuts from DJ Mars and stuff.”

THE DWARVES ARE STILL THE BEST BAND EVER (The Dwarves Are Born Again, 2011)
“From The Dwarves Are Born Again, it’s gotta be a song called The Dwarves Are Still The Best Band Ever. The chorus to that is, ‘Let’s just get high and fuck some sluts’, and, again, I just had that in my head. All the best songs just kinda pop into your head. It’s a song about how we’re supposed to be mature because we’re getting older, and yet it’s so childish and great, right down to the title, which is the most self-aggrandising title ever. I never wanted to make another Dwarves record after The Dwarves Must Die. That was gonna be the end of it, but after writing that song I was like, ‘OK, we have to make another record!‘”

FEFU (The Dwarves Must Die, 2004)
“FEFU is sort of like an industrial jam. English people like that because it’s over-produced, American people hated it because it wasn’t garage enough or whatever. FEFU is about the three most important things: Fuck, eat, and fuck you up. What else is there in life? And I love it, because right in the middle of this industrial jam you get these completely incongruous background vocals that we stole from (I’m Not Your) Stepping Stone by the Monkees.”

Radio Free Dwarves is out now. The band are on tour. For full tour dates, visit their website.