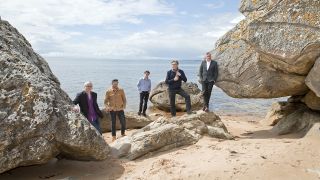 In an uncertain world, Teenage Fanclub are a band to rely on. Formed in 1989, the Scots’ abrasive early sound settled into a harmony-drenched jangle on 90s classics such as Bandwagonesque, and this year’s tenth album, Here, proves the formula still has plenty of juice. From his home in Ontario, frontman Norman Blake sounds surprised by their longevity: “I suppose it’s unusual for bands to stay around for such a long time.”

How is life in Canada?

It’s been crazy hot the last few days. But I’m not going to complain, because the winters can be intense. You’re responsible for clearing the sidewalk of snow next to your house, so there’s been the odd occasion I’ve woken up with a hangover to discover a four-foot snowdrift I have to clear. At those moments I regret coming here.

Here is the classic Teenage Fanclub sound. It’s difficult to tell whether your songs are happy or sad.

We’ve always written from personal experience, so maybe that’s the way we are as people: mostly optimistic, with a little bit of pessimism.

You’ve said this album has a loose theme of mortality?

Yeah, it’s something we write about more as we get older. I think most people do. I’m in my fifties. You start to think a little more about mortality.

No. I remember speaking to my grandfather when he was eighty-five and he said: “I don’t want to die.” I guess people think you get used to the idea of death. But you don’t. I think people always feel young.

What else are your songs about?

They’re about how I experience the world; the ups and downs and travails of life and relationships, debt, money. I’m not the kind of person that’d take a newspaper headline and write a song about that. I have to write from personal experience.

You seem to take longer between albums now.

As you get older you’re inevitably less productive. It’s probably not good for us financially, but it’s just what we do.

What’s the secret to spending almost three decades with the same band members, without killing each other?

We don’t see too much of each other. We get together to work, but it’s not like we’re in each other’s pockets.

How flattered were you that Kurt Cobain was a fan?

Liam Gallagher called you the second-best band in the world, didn’t he?

Yeah. We were in the same studio as Oasis when they were making Be Here Now. One evening Liam came up and said: “Do you want to listen to a playback of the LP?” Liam proceeded to give us a load of beers and mimed along to the LP. That night he said: “Second-best band in the world.” We all thought that was very funny.

Do you mind your band’s nickname being The Fannies?

No, not at all. I guess ‘fanny’ means something different over here. It’s your backside, isn’t it?

Lucky For Some: 13 Artists Beholden to Big Star