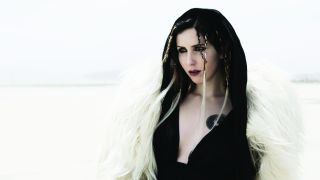 Metal has shared common ground with folk music since birth, one of many influences on a scene often misunderstood as insular, married in their mutual themes of myth and magic, adventure and rebellion.

Black metal in particular has much in common, a shared lament for mankind’s increasing distance from nature, crushed under the boot heels of modernity’s industrialised stampede.

Jordan Reyne, Darkher and Chelsea Wolfe are all artists who in different ways exemplify these connections, kindred spirits finding their own ways to come to terms with the existential anxiety engendered by modern times. Transcending both genre and gender, their music explores the complexities of the human condition, seeking progress, articulating hopes, fears and desires to which we can all attest, their soundscapes often evoking dreamlike states, expressing a desire to gaze beyond the horizons of the everyday world, that they might find escape, or enlightenment. It isn’t hard to see why all three are celebrated by our community, represented by metal labels, and invited to perform upon stages of such high esteem as Roadburn festival or supporting bands such as Fields Of The Nephilim.

Of the three, Jordan Reyne, a restless soul native to New Zealand and now residing in London, is perhaps the most in touch with the everyday world, seeking not to escape its ravages but to take them to task, with a modern incarnation of folk that embraces its rich storytelling heritage while incorporating influences more commonly associated with industrial and post-rock.

“The folk music I like is like metal with more space in it,” she explains, the end result being compellingly difficult to categorise. April 2015 saw the release of Maiden, the final EP of her Mother/Maiden/Crone trilogy, based upon the ‘triple goddess’, a deity common in mythology, here updated as a criticism of modern society’s limiting perspective of the roles men and women are expected to play in their lives.

“Those three things aren’t enough to define the human spirit,” explains Jordan. “These are very tiny, limited boxes within the mass of human behaviour. The reason all gender archetypes annoy me is that – and for men as well, the hero narrative – they all stop you from being a complete person, basically.”

Within the rich narratives woven through her songs, Jordan explores perhaps the largest existential struggle facing us all: who am I? “These concepts are ultimately limiting,” she says, “and when they break down, we’re faced with ‘What do we do? What is our narrative of ourselves?’“

There is a palpable sense of barely contained anger, a frustration at humanity’s tendency to repeat past mistakes. “Anger is the right word. I think it’s what drives me, and certainly what drove me on this cycle. Tethering it means I can direct it at something useful. People have said that makes them feel calm. I like that those two things can be possible at the same time.”

In an unjust world, Jordan articulates a rebel yell attuned to metal’s defiance of the status quo. It may have its roots in traditions past, but it asks questions about our future. What kind of life do we want?

“I think a lot of the reason I choose to follow these stories is the everyday heroes, people who have lived quietly brave lives, are never recognised for it. And this is what most of us do. We have to struggle with what we’ve got and try to find our place where we feel comfortable.”

While Jordan proudly upholds and updates folk’s tradition as protest music, Jayn Wissenberg nurtures its love of nature as a place of retreat. “There is a lot about the modern world that I have, since childhood, found overwhelming,” she ponders. “Music allows me to escape and create my own world.”

Her roots lay in the folk scene with former band The Steals, ties she severed because “there were more realms I wanted to explore. I had been through years of depression, and was making that music to try to uplift, but once I reached a new stage in life, I felt the pull to leave it behind, burn and rebuild.”

Adopting the name Darkher, she departed for unfamiliar shores on 2014’s The Kingdom Field, released on avant-metal label Prophecy after they discovered her darkly dreamlike soundscapes and snapped her up. “It’s only with Darkher that I began to look at the outer world and voice that which I find uncomfortable, to stand back in awe at the lack of control any of us have over what we try to understand and don’t yet know.”

Her voice is wistful, delicately poignant, much of the EP swimming in ethereal mist, save for Foregone, a doom riff built around a ritualistic drum beat. “I feel connected to metal’s intensity and depth,” she says. “I think a desire to create music which retains a mood and explores an element of dark is possibly the common language.”

It is indeed part of the common language; it is in a longing for that which we have lost that this connection reaches profound depths. “I feel that writing music and lyrics is about casting out deep emotional desires or fears,” she continues. “Longing is an emotion I’ve frequently felt both spiritually and romantically. We all connect to the poetry in nature; there’s nothing more powerful and sublime. It’s pure creativity – after all, it gives us life and then part of us returns to it.”

Soon to return with an album that promises to further explore stirring, liminal environs, Darkher aspires only to progress “even deeper and further stir my senses” – an essential release for those who need to step outside of life just to survive.

Chelsea Wolfe may have taken one step too far. Starting as a folk-influenced singer-songwriter, her music began a dark descent that reaches unfathomable depths on forthcoming album Abyss, building upon gothic environs so effectively created by the electro-industrial clamour of 2013’s Pain Is Beauty. While akin to metal, she resists classification. “I don’t really subscribe to any particular genre,” she explains. “I have an affinity for black metal’s white noise. A lot of it’s about a connection to nature and history, and that’s what I’m all about.”

At times dirge-like, she creates spaces within which the fragile beauty of her voice feels threatened. “The catalyst was a feeling of wanting to go deep into the subconscious/ unconscious and find some things I hadn’t confronted. I’d have writing sessions where I’d come out shaking, really digging up heavy emotions.”

An attempt to articulate her near-daily experiences of sleep paralysis, slumber offers the ultimate escape beyond earthly realms, second only to death, a portal to an altered state of consciousness that for Chelsea is a realm from which it is difficult to escape. “I’ve always had sleep and dream issues,” she says. “Sleep and death are prevalent throughout this album, but the Abyss takes on different characteristics and meanings for each song. Having an almost daily connection with this in between state of waking and sleeping started to affect the way I looked at things. Reality is surreality in the dream-state.”

A private person, she struggles with exorcising personal demons on a public platform, once suffering from stage fright to such an extent that she wore a veil on stage. These days she copes better, but still struggles to bare her soul when writing. “The first music I ever made was overly personal. I threw it away and made a conscious decision to write about things outside of myself. I could write about love, but it had to be someone else’s story.”

Like Jordan Reyne, Chelsea adopts personas from which to tell her stories, but for a different purpose. Jordan offers contrasting perspectives, while Chelsea evades exposure. “Here and there certain songs are really autobiographical, but I’d never tell which ones…”

Her music struggles with the joys and sorrows that life randomly brings. It might be easy to try and hide from pain and loss, but they are ultimately inescapable. As the old saying goes, death is a part of life; the ultimate abyss.

“Life is as painful as it is beautiful. Sadness is a part of life that people shy away from, which isn’t healthy. I’m like that, too, I’m an escapist. I don’t find joy in sadness, but I think it’s important to try to find the grace in loss.”

Be they metal or folk, or somewhere in the space between, the ideas these three unique artists explore transcend issues of genre, uniting with a wider artistic continuity searching for answers to profound questions.

JORDAN REYNE’S TRILOGY IS AVAILABLE VIA BANDCAMP AND ITUNES. CHELSEA WOLFE’S ABYSS IS RELEASED ON AUGUST 7 VIA SARGENT HOUSE. DARKHER’S THE KINGDOM FIELD IS OUT NOW VIA PROPHECY PRODUCTIONS